The England Roses have sealed the Vitality Netball International Series with a match to spare after a 61-53 win at the Copper Box Arena.

With the Series up for grabs, it was a scrappy start to the game with a few misplaced passes in the opening stages. 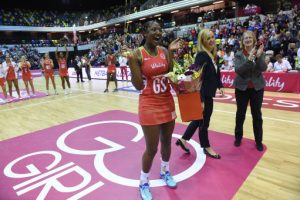 Kadeen Corbin is presented with flowers and balloons by head coach Tracey Neville (left) and England Netball President, Lindsay Sartori, in recognition of her 50th cap for England

After leading the team out, Kadeen Corbin started her 50th appearance in style with an excellent steal in the mid-court.

There was a turnover apiece and plenty of tips but not much sticking with both teams taking time to get into a rhythm.

The Queens pulled 3-2 ahead following top work from Joanna Kachilika to win the ball back after a footwork call on Mwai Kumwenda.

Friday’s Player of the Match Corbin continued her fine form with a lovely looping mid-range effort sailing through to draw the Roses level at 4-4.

Natalie Haythornthwaite displayed her athleticism with a great take before finding Wasps Netball teammate Rachel Dunn in her favourite place – under the post – to score.

An excellent Roses scoring streak put England 9-4 up in the blink of an eye.
Tracey Neville’s side continued to push on and displayed some solid defensive pressure.

Beth Cobden read a Malawi pass and flew in with a fabulous intercept, the ball was quickly transitioned through the court and England pushed to eight goals clear.

With the Roses leading 16-9 at the end of Q1, there were no changes made for the start of Q2.

Malawi conceded possession cheaply when they looked to have stolen it and the Roses punished them to take the score out to 20-10.

The Queens continued to threaten with phenomenal hands from Rose Mkanda to keep the ball moving as they worked hard to peg the Roses back to 26-17.

A majestic leap and steal from Jodie Gibson had the crowd on their feet as the Roses remained resolute in defence.

Corbin continued to fire them in from all over the circle and the home side led 31-25 at half-time.

Eleanor Cardwell entered the action at GA at the start of Q3 with Corbin taking the GS bib.

The two teams were goal-for-goal until a converted turnover from the Queens but captain Ama Agbeze led by example with a steal, Corbin replied and the gap was restored to five goals.

The Roses’ attacking play was flowing with a lovely diagonal but Malawi responded in kind to pull it back to 35-30.

The players were leaving everything on court in a hard-fought and passionate match but Cardwell held her nerve to make it 38-32.

With Malawi repeating Friday’s late charge, it was time for another Roses change as Sasha Corbin came on at WA.

A long Queens feed was picked off but England lost the ball in mid-court and Malawi reduced the lead to just three.

A last-second Q3 effort from Corbin rattled out as the Copper Box Arena were all set for a tense final 15 minutes with the score standing at 45-40 to the Roses.

The Corbin sisters combined to great effect with a sharp pass from Sasha finding Kadeen in acres of space under the post and the GS made no mistake to extend the Roses’ lead to 53-44 with eight minutes remaining.

Malawi were unable to capitalise after an effort for Cardwell failed to drop with Gibson once again in the right place at the right time to steal.

The Roses continued to hold a strong lead with five minutes to play and pulled further ahead in the closing stages thanks to sharp shooting and stifling the Malawi attack.

After an impressive defensive display, Gibson was named Player of the Match.

The Roses will now travel to the Genting Arena in Birmingham with an unassailable 2-0 lead, hoping to now see out the series in style and complete a 3-0 whitewash.