A blistering first quarter from the England Roses inspired them to victory in the opening match of the Vitality Netball International Series on Friday night, despite an impressive Malawi fight back. 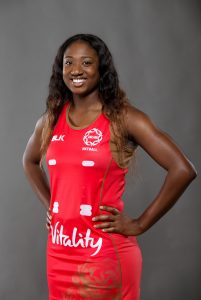 England raced into an eleven goal lead at the end of the opening quarter with Kadeen Corbin and Rachel Dunn impressively dominating the shooting circle.

At the other end, the Queens were struggling to break through the Roses defensive line and were dealt an early blow when Mwai Kumwenda hobbled from the court after just five minutes.
The momentum was with the Roses and they continued to capitalise in the final third to build a 22-11 lead after the opening fifteen minutes.

The return of Kumwenda provided a much needed spark for the Queens and they responded excellently in Q2.

The deficit was down to six almost instantly as the energy through court from the visitors started to pay dividends. A more robust defensive approach from the Queens failed to halt the Corbin streak as she ended the half with 15 goals from 15 attempts.

Despite the continued accuracy of the Roses’ shooting duo, the advantage had shrunk to 39-30 at the half-time interval.

The physicality continued in the third quarter with Jade Clarke and Beth Cobden putting in the hard yards to cover Malawian attacks. A number of deflections and steals keeping the away side at bay.
It was matched by a rejuvenated Queens with Loreen Ngwira showing her athleticism with an astonishing sideline intercept to push her side forward.

With five minutes remaining in the quarter Ellie Cardwell made her way into GA with Corbin taking over at GS. The change made an instant impact with the Roses able to stifle their opponents, and the clock, to take a ten goal advantage into the final quarter, 51-41 to the hosts.

With a significant gap to overcome, Malawi had to come out fighting and they certainly did. Turnover goals reduced the Roses’ lead and the phenomenal Queens support in the stands ratcheted the noise levels up another notch.

England remained calm and the introduction of Sasha Corbin saw the home fans in full voice to welcome the ever-popular mid-courter onto court.

However, it was sister Kadeen who was stealing all the headlines with a fantastic Player of the Match performance.

A piece of wonderful movement was deservedly spotted by Clarke who unleashed a fabulous feed for the younger Corbin to cap a fine display.

The Queens continued to battle but were ultimately undone by their slow start. There was certainly enough heart shown after that to suggest that Sunday will not necessarily be the coronation that the Roses will be hoping for.