Diede de Groot of the Netherlands, British number one Alfie Hewett, and the USA’s David Wagner were crowned as champions during an outstanding 2017 Bath Indoor Wheelchair Tennis Tournament.

Their successes capped a world-class week of competition at the University of Bath Sports Training Village, where multiple Grand Slam champions and Paralympic medallists served up a host of memorable performances.

It was de Groot’s fourth Bath Indoor trophy in two years, having also retained her women’s doubles title with Britain’s Lucy Shuker after a 6-0 7-5 win against Ellerbrock and the Netherlands’ Marjolein Buis. 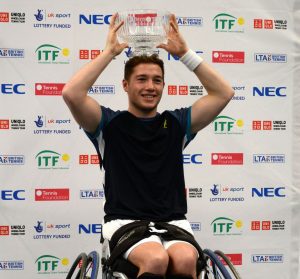 Hewett had produced one of those in the men’s singles quarter-finals, recovering from losing the first eight games to beat defending champion Joachim Gerard 0-6 7-6(4) 7-5.

The 2017 Roland Garros champion then overcame Japan’s Takashi Sanada 7-5 6-2 before beating Wimbledon winner Stefan Olsson of Sweden 6-0 6-4 in the final.

“That was probably the best match I’ve played all week,” said Hewett, who was 4-2 down in the second set before taking the last four games to seal the title.

“It was a good first set from me, I was solid, but I knew Stefan would come back. I won a crucial game to hold at 4-2 down and then I was back in the match.

“I’ve taken time off to train and work really hard since reaching the US Open final a couple of months ago, so to perform the way I have this week is really pleasing.”

The first trophy of the week went to world number one Wagner, who took his 11th quad singles title of 2017 with a 6-1 0-6 6-4 victory over Rio 2016 Paralympic champion Dylan Alcott of Australia.

The quad doubles title was won by Ymanitu Silva of Brazil and South Africa’s Lucas Sithole, while a great week was wrapped up by a 7-6(2) 6-2 victory for Gerard and Olsson in the men’s doubles final against Sanada and South Africa’s Evans Maripa.

It is Britain’s second-oldest county cup competition, dating back to 1946, and will feature the top men’s and women’s teams from across the country. It runs from Friday to Sunday and spectators are welcome to watch for free, with plans also in place to live-stream the event for the first time.

Team Bath’s all-encompassing tennis programme is one of just four LTA International High Performance Centres in the UK – recognised as having exceptional tennis facilities available to performance athletes (junior and senior), members of the public and students. For more information, visit www.teambath.com/tennis.