World Rugby has announced the shortlists for the prestigious Men’s and Women’s 15s Players of the Year awards for 2017, which will be presented at the World Rugby Awards at the Salle des Etoiles in Monte Carlo on 26 November.

Following a stellar year for international rugby, the shortlists for the ultimate accolade feature players who have excited and inspired fans around the world with their feats in 2017.

In a new step in the selection process, fans, international captains, coaches and media will have their say before the panel considers the winners of the prestigious awards. 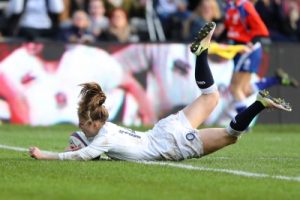 World Rugby Chairman Bill Beaumont said: “There have been numerous highlights from a fascinating year of international rugby that comprised an outstanding Women’s Rugby World Cup, a compelling British and Irish Lions tour, Six Nations and The Rugby Championship competitions and a superb programme of test rugby.

“As ever, the selection of Men’s and Women’s 15s Player of the Year nominees by the panel has excellence as the core consideration and all are not just superb players, but role models.

“I am sure there will be lots of debate over the coming weeks. I’d like to thank the panel for their expert consideration and look forward to the winners being announced at the World Rugby Awards in Monaco.”

LYDIA THOMPSON (ENGLAND)
An intelligent reader of the game with pace to burn, Thompson has shown in 2017 why she is one of the best finishers in the game, scoring 12 tries in 10 matches. The winger scored twice in England’s WRWC 2017 final loss to New Zealand, leaving Woodman in her wake for one. The winger played four matches in England’s Six Nations Grand Slam-winning campaign, scoring a hat-trick against Wales, and helped the Red Roses win the International Women’s Rugby Series in New Zealand before catching the eye again in the World Cup with her five tries in all.

KELLY BRAZIER (NEW ZEALAND)
Now a two-time Women’s Rugby World Cup winner, Brazier was a key figure as the Black Ferns regained their crown in Ireland in August with her vision enabling her to slice through defences at will or unleash an exciting back three to punish defences. The 28-year-old centre, who is just as effective at fly-half, played all eight tests in 2017 after switching back to 15s in May having helped New Zealand win three rounds on the HSBC World Rugby Women’s Sevens Series.

ROMANE MENAGER (FRANCE)
The youngest of the nominees at only 21, Menager was one of the stars of Women’s Rugby World Cup 2017 as Les Bleues came away with another bronze medal. The openside flanker produced some imperious displays, scoring four tries as France overwhelmed Japan, Australia and Ireland in the pool stages. She missed the semi-final due to a knock and France missed the charging runs and power that had made her a stand-out. She returned at number eight for the final day to ensure her side returned home with a bronze medal and cemented her place in the tournament dream team.

SAFI N’DIAYE (FRANCE)
Another powerful presence in the French back row is the more experienced N’Diaye, who at 29 is the oldest of the five nominees. Easily identifiable on the pitch by her patriotic scrum cap, the number eight consistently gets over the gain-line to open up opportunities for her side and started nine of France’s 10 tests in 2017, coming off the bench in the WRWC 2017 bronze final victory over USA. A nuisance at the breakdown, her powerful runs make her a difficult player to stop when she gets going.

PORTIA WOODMAN (NEW ZEALAND)
The 26-year-old played every minute of the Black Ferns’ successful WRWC 2017 campaign, scoring 13 tries – including eight against Hong Kong in the pool stages and four in their semi-final win over USA – to finish as top try and point-scorer. If she wasn’t using her pace, power and unbelievable footwork to score herself she was creating opportunities for those around her. The former netballer, who only returned to 15s in May, played all eight of New Zealand’s tests in 2017, scoring 16 tries in total to take her career record to a remarkable 22 in just 16 tests.

BEAUDEN BARRETT (NEW ZEALAND)
The 26-year-old could become only the second player to win the prestigious accolade two years in a row after another impressive season in the All Blacks No.10 jersey. He celebrated his 50th test against Samoa with a two-try, 24-point haul and a piece of All Blacks history alongside his brothers, and finished the Lions series as top point scorer with 41. The attack-minded fly-half, who is equally at home at full-back, continued to torment defences with his instinctive play and captained the All Blacks for the first time in the non-capped victory over the Barbarians earlier this month.

OWEN FARRELL (ENGLAND AND LIONS)
Another player nominated for the second year running and third time in total, Farrell continued to pull the strings for England and the Lions at inside centre in 2017. He started all five tests in England’s victorious Six Nations campaign, reaching 50 caps for his country against Italy in February and breaking through 600 test points in the final round loss to Ireland. The 26-year-old also started the three tests on the Lions tour of New Zealand, the first of them at fly-half, and contributed 31 points in the drawn series.

ISRAEL FOLAU (AUSTRALIA)
The oldest of the nominees at 28, Folau has been back to his scintillating best in 2017. The full-back came into the year without a try in his previous 11 tests, but rediscovered his scoring touch to set a new Australian record for tries in a calendar year with 12 in his 10 tests, failing to cross the line in only two matches. The first Wallaby to score doubles in three consecutive tests back in June, he was joint top try-scorer in the Rugby Championship and will be missed on their end of year tour after electing to take a break after a long season.

RIEKO IOANE (NEW ZEALAND)
Ioane, the youngest of the nominees at only 20, is also nominated for the World Rugby Breakthrough Player of the Year award having made the All Blacks starting left-wing spot his own following a two-try haul in his first test start against the British and Irish Lions in June. He then shared the top try-scoring honour in the Rugby Championship after topping the charts for defenders beaten, clean breaks and metres made, and arrives in Europe with a record of eight tries in his nine starts this year.

MARO ITOJE (ENGLAND AND LIONS)
The Breakthrough Player of the Year in 2016, Itoje is nominated for this prestigious award for the second year running after continuing his impressive form in 2017. Deployed at blindside flanker, rather than second-row, throughout England’s victorious Six Nations campaign, his performances ensured his place on the British and Irish Lions tour to New Zealand. He came off the bench in the first test and earned a starting spot in the second-row for the remaining tests.