On the 4th of November, Loughborough Lightning were looking to kick off the month with a victory against a visiting Richmond side. The two teams stepped out onto the first team pitch as the winter sun began to dip behind the horizon, and at 3pm, the game commenced. 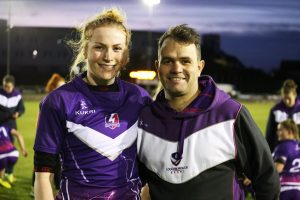 Both sides showed confident displays of attacking play in the beginning of the game. Richmond were carrying the ball in and Lightning’s defence was meeting the challenge well. The first lineout of the game proved a turning point in play, Richmond failed to throw the ball in straight and the resulting Loughborough scrum saw Lightning push up the pitch toward the Richmond line. A try looked on the cards, but an unfortunate knock on mere feet from the line broke down play and the ball was turned over.

Richmond then began to attack once more, but to no avail as they couldn’t find the space to break the Lightning line. Lightning once again returned the attack in the 18th minute, and found themselves contesting close to the Richmond try line. A contest that Lightning deservedly won when they gradually drove the ball over the line. Scoring and converting to take the lead in the 20th minute.

Just 10 minutes later, Lightning were driving for the line once more; however, this time Richmond were able to hold on long enough for Loughborough to make a mistake. Their winger picked the ball up and made a break, streaking down the side-line. Lightning lived up to their name quickly though, chasing back very quickly to make the tackle and bring the player down. However, Richmond chased up just as fast, they had a one player overlap and used it to score an unconverted try.

With the half almost over, Loughborough managed to secure a scrum within the Richmond 22’. Number 14 Carys Williams got on the end of a searching pass in plenty of space and she looped round to score. With no conversion, the half ended with Lighting hanging on to a narrow lead.

The temperature dropped drastically during the half time break, and the sky had considerably darkened. Richmond had rallied and were looking dangerous from the whistle; they had a lead to chase. They broke the Lightning line in the 55th minute to score an unconverted try.

Lightning recovered quickly though; Florence Williams put her boot to use in the 61st, scoring a penalty to alleviate the Richmond pressure. Seven minutes later, Lightning were looking more dangerous and had Richmond on the back-foot close to their line. Natasha Jones then found a gap and surged for the try line. With a failed conversion, Lightning were 10 points ahead.

Richmond wouldn’t be easily defeated though, scoring in the 77th. They failed to convert once again, but the try alone brought them within one score of the leaders. The last 3 minutes of the game were intense, Lightning were holding their ground in the centre of the park. Then Emma Hardy broke the deadlock in the last minute of the game, dodging a tackle, and then another to put on a sensational run that ended under the posts. Williams then converted to solidify a win for Lightning.

Overall a thoroughly well-deserved victory for Loughborough Lightning. They were put under pressure by a Richmond side that could have very capably snatched a victory; however, their determination and organisation payed off.

Elated by such a sensational win, Head Coach Rhys Edwards commented on the day’s events;

“It was great to get the win today and more importantly the bonus point but more pleasing was how we actually played, the last two games at Wasps and DMP have been particularly tough so to actually start moving the ball and giving our outside players some early ball to play was good to see and some of the tries we scored reflected that. It was good to see the element of play but we still had to work hard, physically with Richmond carrying it and to get a win off the back of that was very pleasing.”

Awarded the coveted MVP of the match was Cath O’Donnell after a standout performance;

“I really enjoyed the game today, I think the girls all played really well and I’m so proud to have been given player of the match.”

Lightning are back on the road next weekend as they travel to Bristol for the next round of the competition.