Georgina Mitchell continued her fine 2017 form as she finished 4th at Olympic Hopes today, leading the Pentathlon GB girls to team bronze in the process. It was a sense of déjà vu for the 16-year-old having also finished 4th individually and 3rd in the team classification 12 months ago, but with Youth Olympic Games ranking points up for grabs, the 2017 field provided a much sterner test. 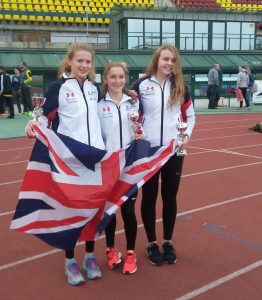 Mitchell was joined on the podium by Alex Bousfield and Annabel Denton who finished 10th and 26th respectively with the fourth member of the team, Charlotte Cole, coming home 39th in a large and competitive field.

The feat made it two bronze medals in two days for Pentathlon GB’s female athletes with Zoe Davison, Kerenza Bryson and Jess Varley claiming team bronze at the Under 24 European Championships in Poland yesterday.

Story of the day

The competition began in the pool where Warwick’s Mitchell led the British charge in a time of 2:15.33, the fifth quickest of the day. Bookham’s Cole, making her first international appearance since the Youth Olympic Games European Continental Qualifier, was 1.5 seconds back with a time of 2:16.83, also leaving her inside the top 10 after the opening discipline. A strong quartet of swims were completed by Cholesbury’s Bousfield with a time of 2:20.82 and Plymouth’s Denton, the youngest member of the team, who stopped the clock in 2:22.71.

The Brits then moved to the fencing hall where a mammoth schedule featured 43 hits for each competitor. Mitchell, who claimed the first international medal of her career by winning the Kyrgyzstan Open earlier this month, continued her fine form by picking up 28 victories and 15 defeats from her bouts, keeping her in 5th place after the opening two disciplines.

Bousfield who trains at Dacorum MPC in Hemel Hempstead, also recorded a top 10 discipline finish, securing 27 victories and moving her up to 8th place in the overall standings in the Czech capital. North Kent MPC’s Cole and Plymouth College’s Denton both picked up 14 victories, meaning they were 31st and 37th heading into the concluding laser run.

In the final discipline, Plymouth College’s Mitchell completed a fine day as she moved up a place in the laser run, crossing the line 4th and being one of just 5 athletes to score over 1000 points. Bousfield also performed well in the run-shoot discipline as her best laser run of the season saw the 16-year-old maintain a top 10 position at the finish.

A late surge from Denton saw the 14-year-old, one of the youngest athletes in the field, move up 11 places in the final discipline and help the trio claim team bronze. Meanwhile Cole, who was only called up to the team at the beginning of the week, showed the whole team’s determination as she kept battling to the finish, crossing the line in 39th.

Pentathlon GB coach Frici Foldes who is with the team in Prague commented “There were good performances from all four girls today and it was a deserved team medal. It’s an encouraging first day of the competition for our athletes and we hope to continue that over the weekend.”