Yeovil Town Ladies are looking to Pack The Park this Sunday 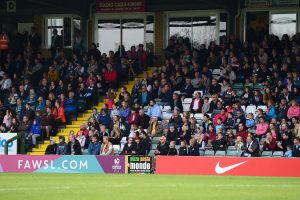 Further to their Club Statement released last week, following The FA’s announcement to restructure the top of the women’s football pyramid, Yeovil Town Ladies FC are now in a position to share the next steps with its fans, business community and media.

The club urges fans to ‘Pack The Park’ in this Sunday’s match v Sunderland which kicks off at 2pm. Following this fixture, the club is giving everyone connected with the club, in all capacities, the opportunity to discuss the recent announced changes, but to also explore ways in which they can get involved and support Yeovil Town Ladies future development.

The forum event was originally planned for Monday evening, however, in view of the large amount of support already sent in to the club, it has been decided to move this event to a day earlier, whilst also encouraging a big attendance at the next FA Women’s Super League home match.

A new email address has been set up, giving people the chance to send in questions or suggestions to achievebyunity@yeoviltownladies.com and this will be monitored in the lead up to Sunday, with any key questions or information shared where possible.

Following the match on Sunday, the Alec Stock lounge, will be made available to fans, media and businesses, where spokes-people from Yeovil will be on hand to share some ideas and plans, which will assist with their application for a Tier 1 license in the 2018/19 season, and therefore, keeping a deserved place in the top of the women’s game, having worked so hard over a number of years to gain its place on merit.

Only those with a matchday ticket are eligible to attend this post match event and should numbers attending this be so high, the forum will be delivered on a larger scale in a slightly different way, in order to get the message and plans over to everybody in attendance and those keen to support Yeovil Town Ladies moving forward.

The club mantra of Achieve By Unity, is one which helped the club win the Club of the Year award twice in three years, which was presented by The Football Association in 2014 and 2016. This lead to success on the pitch as well as off it, when last year, Yeovil Town Ladies FC reached their current high profile after winning the league, beating Bristol City, who were second and Everton in third.

The Yeovil, staff, players and board are committed to remaining ambitious and whilst focusing on this current season of football, the application for the 2018/19 season has been given a deadline of 10th November for submission.

Tickets for Sundays match v Sunderland can be purchased online here, with turnstiles open from 12.30pm for the 2.00pm ko. The after match event, is to begin from 4.00pm after the full-time whistle.

Yeovil are committed to providing a great matchday experience, and Sunday is no different, so aside from this, come along and watch some elite level top flight football.