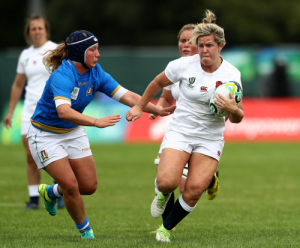 A World Cup winner in 2014, Packer is no stranger to international success. The flanker has 51 caps for her country and was a stand out player in the 2017 World Cup, notching up two tries against the USA to put England through to the semi finals and was named up Aon Player of the Match vs Italy. She also represented England in the Sevens World Cup in Moscow in 2013.

Commenting on the announcement, the 27 year old flanker said “I’m delighted to be joining Saracens this season. The club has an exciting buzz about it and I can’t wait to start this next chapter of my rugby career.”

Saracens Women head coach Rob Cain added: “It’s great to welcome Marlie to the club. Saracens has a proud history of having some of the best international 7s in the women’s game throughout the last ten years with Helen Clayton, Maggie Alphonsi and Hannah Gallagher.

“Marlie has proven both on the international and domestic stage that she is one of the best 7s in the women’s game and her joining us will add even more inner competition to our group.”

Round 18 of Allianz Premier 15s to be live streamed.

The Vitality Women’s County T20 series is under way.

After the dust has settled.