Worcester Valkyries fell to defeat in their first home game of the season as a powerful Bristol Ladies Rugby won 62-10 in the Tyrrell’s Premier 15s at Sixways on Saturday. 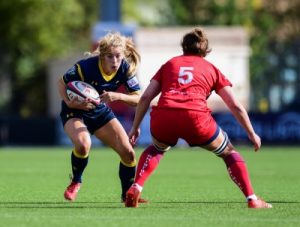 The visitors ran in ten tries with five for winger Lillian Stoeger in an emphatic win over a young Valkyries side.

Valkyries’ Zoe Bennion crossed twice in the first-half but it was a convincing win for Bristol, with the result leaving Valkyries rooted to the foot of the table after the first two games of the season.

The hosts started on the front foot seeing plenty of possession and territory and benefited when Bennion crashed over from close-range.

However, Bristol reacted instantly with two scores, with the first coming from Attwood with a superb 35-metre run off the back of a lineout.

Stoeger added the second two minutes later after Bristol shipped the ball wide and the wing was the beneficiary exposing the Valkyries defence to score under the posts.

McNaney sliced through the home defence on halfway to score before Stoeger was on the end of a neat Bristol move from deep in their own 22. Attwood converted to give the visitors a convincing lead.

Worcester hit back through a nicely-worked try from Bennion, who showed great strength to go over from five metres out leaving the Valkyries trailing 33-10 at the break.

Worcester began the second period as they did in the first, with plenty of possession, but failed to execute chances into points.

Cara Brincat showed why she is an exciting young prospect with a high tackle count and destructive running causing the Bristol defence problems.

Despite Worcester’s best efforts, slack defending allowed Stoeger in for her hat-trick after a poor 22-metre dropout and the winger eased in under the posts.

Attwood added her hat-trick after patient phase-play from the visitors which allowed the fly-half to dummy and touch down from close-range.

Worcester conceded three tries in the final six minutes as Bristol’s forwards crashed over a Valkyries ruck, turning over possession and shipping the ball wide for Stoeger to score in the corner.

The wing then scored her fifth try of the game courtesy of a quick penalty from Mattinson who selflessly offloaded the ball for the winger to score.

Mattinson then added a try of her own as Bristol mounted pressure on the Worcester tryline and the replacement scrum-half capitalised on slow defending as she dived over the ruck to score with the final play of the game.

Report courtesy of the Worcester Valkyries