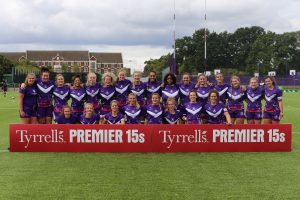 As one of the new teams to enter the league in its inaugural year, Lightning walked out on the pitch with a steely determination to prove themselves as the ones to watch this season. Boasting a handful of internationals and under the watchful eye of Head Coach Rhys Edwards the girls secured their victory comfortably after recording eight tries in their opening match.

Just four minutes of the game had passed before Lightning added their first points to the board, with England 7’s star Olivia Jones sprinting over the line to dot the ball down; a sensational try that was then seamlessly converted by centre Florence Williams.

Just eight minutes passed before Lightning once again rejoiced as newcomer and talent transfer athlete Bethan Zeidler doubled Lightning’s lead in her first game of 15s after making the switch from Sprint Kayak. 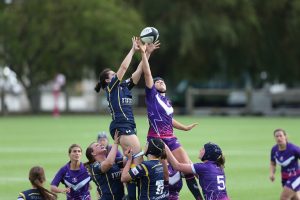 Despite the increasing score line Worcester looked to seize an opportunity as Rebecca Herring impressed crowds with her skills, Lightning however were less than phased and continued to apply pressure causing vital errors in the oppositions attack.

A knock-on from Worcester saw Lightning capitalize, recording their third try of the game, Olivia Jones claiming a brace in her opening match for the side. A surge of energy in lightning’s attack then saw another try, this time from fly-half Natasha Jones as she fired over the line.

A floundering opposition seemed to regroup and recover quickly however strong defence from Lightning’s Mag Lowish, turned the ball back in their favour and opened up the field for Charlotte Pearce to score their fifth try of the day from the half-way line.

The second half opened up with competitive play from both sides, Worcester fighting tooth and nail to rewrite the first 40 minutes. Neither side were able to make it to the line for the first 16 minutes until Lightning’s replacement prop Ofure Ugiagbe shrugged off a resistant Worcester and thundered towards the line to begin the second half scores. Clean conversions from fly-half Natasha Jones added yet more points to the board much to the dismay of the opposition. 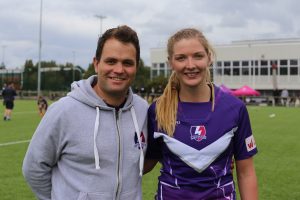 Ten minutes later the final quarter of the match saw Lucy Nye increase the lead and bring the score to 41 – 0. Despite a widening lead, Worcester failed to back down and a yellow card for Lightning’s Emma Hardy gave them a much needed boost to finally push over the line, scoring their first points of the game.

Quick fire retaliation from Lightning treated the crowd to their final try of the day from England 7’s Celia Quansah who found a hole in the corner to dot the ball down. A final flurry from Worcester closed the game with another try after Lightning’s Lucy Nye was awarded a yellow for a high tackle.

A standout performance from England 7’s Olivia Jones saw her claim the Player of the Match award after scoring a brace of tries;

“I absolutely loved it today; the girls have been so supportive as I’ve only been here a week, so to come in and get the support from all the girls, to set the platform and put the marker in the sand today was great fun. It was definitely important to have a strong game today we now want to mark that platform so we can push on, this is just a start.”

“Half time was a case of ‘this is a good start but we need to kick on’ and we were a bit flat in the second half which was disappointing but as a first game, first opportunity and the first time these girls have played together it’s a fantastic start, I couldn’t have asked for a better opener.

This was our chance to see where we are as a team and we now have those areas that we can work on, defence in particular and our discipline, but in general we have a solid starting point and we can only get better.”

Lightning are back in action this weekend, travelling away to Allianz Park to face Saracens in round 2 of the Tyrrells Premier 15s competition. Keep up to date on all the latest news by following us on Twitter @LightningRugby.

Player of the Match: Olivia Jones