Loughborough Lightning have announced the signing of recently capped Scottish Rugby internationals Sarah Bonar, Rachel Malcolm and Jenny Maxwell ahead of the inaugural season of the Tyrrell’s Premier 15’s competition. 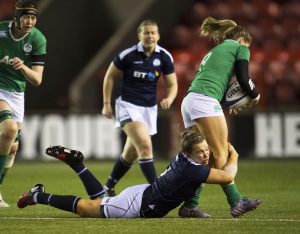 Former Loughborough University Sport & Exercise Science student and hockey scholar Rachel Malcolm makes a welcome return to Loughborough having taken up a completely new sport. Malcolm made the switch from hockey to rugby a mere two years ago and has already earned herself a place in the Scotland squad. After securing her first cap against Spain in a World Cup qualifier, Malcolm showed her worth, securing a place in the Scotland squad for the Six Nations.

Following this impressive start to her Rugby career Malcolm has since been named Loughborough Lightning Captain for the 2017/2018 season.

Speaking about the move Malcolm said: “It’s very exciting to be part of a brand new team and make the most of the incredible setup at Loughborough. Everyone in the squad has approached this new challenge with real enthusiasm and commitment. It’s been a tough few months of hard work since Rhys came in but I can’t wait to get the season started and hopefully we can keep progressing as a team.” 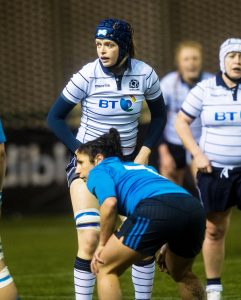 A fellow University alumna, Sarah Bonar also joins the side after a greatly successful 6 Nations campaign. Following a similar pattern to Malcolm, Bonar was previously part of the GB Rowing Start Programme whilst at Loughborough, converting to rugby just three years ago.

On pre-season Bonar commented: “Pre-season has gone very well and the support that we have received from Loughborough has been fantastic. Having access to world class facilitates, physio, S&C and coaching has been incredible and I feel we are really well prepared and I am excited to start the season.”

Jenny Maxwell completes the trio of Scottish signings. Maxwell, who has been playing rugby since the age of six, is a seasoned international having broken into the Scottish U20 squad back in 2012. Maxwell’s dynamic style and confidence led to her competing for Scotland Women’s 7s and after a summer out travelling, Maxwell made her full senior international debut in the 2015 Six Nations. Starring against France in the opening game, she firmly cemented her place in the squad and has featured heavily in all games since. 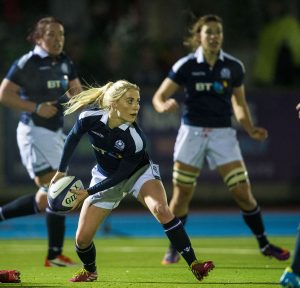 Looking towards the new season Maxwell added: “The start of a new season is always exciting and I’m absolutely delighted to be involved in the Premier 15s with Loughborough Lightning. The programme and support we have had so far has been outstanding and I’m really looking forward to seeing what we can do throughout the season.”

Keep your eyes peeled for more exciting news as we reveal more of our star studded Lightning line up over the coming days.

Loughborough Lightning kick-start their season on home turf on Saturday 16th September as part of their Double Header event with Loughborough Students Rugby National One side. Be part of the action by heading down to campus to witness the start of their campaign.