Wakefield Trinity and Oulton Raidettes started the afternoon tied in second position in the table and that’s how it ended after an end to end contest on Sunday. 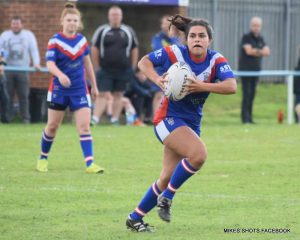 The hosts made a great start to the match when the kick off was spilled by Oulton and Wakefield made the most of the handling error, Yasmin Copeland finding Dani Rose with a superb cut out pass to score in the corner. Nicole Austin-Dyson agonisingly hit the crossbar from the touchline.

Oulton responded via Vanessa Harriman crossing next to the uprights making the conversion by Frankie Townend a formality. Wakefield were unlucky not to regain the lead when Lauren Hayes pounced on a Austin Dyson kick through with the official deeming the ball had gone dead before grounding. 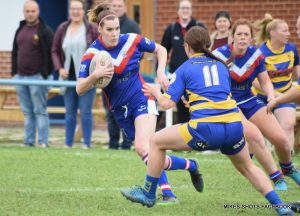 It wasn’t until the half hour mark until Trinity were able to hit back, Dani Rose scooting down the blindside for her second try of the afternoon. Wakefield extended their lead just before the half time whistle when super sub Phillippa Lockhart finished off a score in the corner after going through several pairs of hands.

Oulton started the second period the stronger team as Wakefield struggled to complete and within 5 minutes of the restart had regained the lead with two quick fire converted scores by Frankie Townend and Danielle Anderson, Townend accurate with the boot on both attempts. 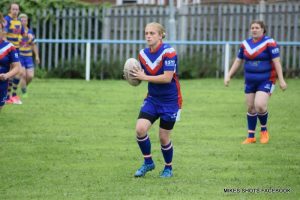 On the hour-mark Trinity broke the resolve with a sublime score next to the posts, Georgia Cutt made a strong run for the line attracting several defenders before a quick play of the ball gave Nicole Austin-Dyson gap who unselfishly supplied Yasmin Copeland to power over with defenders in tow. Stand Off Nicole Austin-Dyson kept her cool to add the conversion and tie the scores 18 a piece. 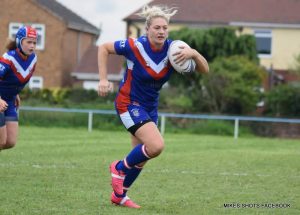 For the remaining 10 minutes, despite both teams efforts the scores remained grid locked and both teams had to settle for a share of the spoils. The stalemate means Oulton and Wakefield stay inseparable in joint second position. Next up for Wakefield Ladies is a trip across the Pennines to face Wigan St Patricks who had a convincing 56-0 victory over Barrow Ladies.

Pattern of the day’s play: