The England Roses were beaten 54-51 by South Africa SPAR Proteas in their final Quad Series match.

An impressive third quarter from the Proteas proved decisive in a hotly contested and high quality game. 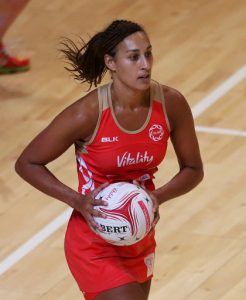 The experienced defensive duo of Geva Mentor and Ama Agbeze were hoping to blunt the South African attack.

The Proteas got within six goals of the Australian Diamonds in their last Quad Series outing – the closest the two nations have been in an international match for 50 years – and they once again displayed how far they’ve come over the past few years.

An early Helen Housby deflection disrupted the Proteas’ rhythm but they still managed to work the ball through court to Lenize Potgieter to open the scoring.

It was goal for goal in the opening few minutes between two determined and committed sides with nobody giving an inch at all.

The South African defence remained resolute but the Roses were patient in their build-up and two quick-fire goals – one from Kadeen Corbin and one from Housby – saw them take a 6-4 lead.

The Roses got into their stride midway through the first quarter and started to pull away. 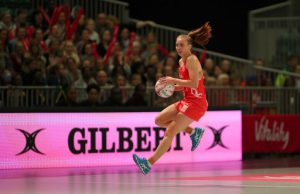 But the Proteas’ heads didn’t drop and they clawed their way back into the game with three unanswered goals from Potgieter cutting the Roses’ lead to just one goal.

Housby scored to end the Proteas’ goal-scoring run but Potgieter replied with four unanswered goals at the end of the first half to give her side a narrow 13-11 lead.

Potgieter continued where she left off in Q2, getting fingertips to a Mentor pass and coolly netting from under the post.

The Roses turned things around in the opening few minutes of Q2, helped by explosive movement in the circle and sharp shooting from Housby.

But they were unable to extend their 16-15 lead and the Proteas rallied and took advantage.

Maryka Holtzhausen was handed a second bite of the cherry after Potgieter successfully tipped the rebound to her attacking partner and she made no mistake second time around to make it 19-17 to the Proteas.

Bongiwe Msomi was a thorn in the Roses’ side, demonstrating impressive acceleration and movement on the outside of the circle.

Both sides displayed lovely vision and attacking play before the break and the evenly-matched teams went into half-time all square at 26-26.

Jo Harten returned to court at GS at the start of Q3 much to the delight of the Roses’ fans, but it was the Proteas who started better.

They flew out the traps with Potgieter scoring three times without response to help her side establish a three-goal lead.

The Proteas were one step quicker, one second smarter and one move ahead.

With the Roses on the back foot, Neville made a double defensive change – the experienced Jade Clarke came on at WD and Stacey Francis took the GD bib.

The Roses fought back from a five-goal deficit with Harten capitalising on a couple of lucky breaks to narrow the gap to just two goals.

But the Proteas restored their five-goal margin with three minutes left on the clock in Q3 and didn’t look back.

They transitioned the ball quickly through court in Q4 and there was a great take from Holtzhausen before she held her nerve to score from under the post.

The Roses were thwarted by an excellent defensive effort with Karla Mostert flying in to intercept Chelsea Pitman’s looped pass to Harten as Neville’s side looked to cut the Proteas’ lead.

With two minutes left and two goals the difference, Housby was unlucky to not see her effort drop in.

The Proteas kept their composure and the impressive Potgieter scored with seconds remaining to seal the win.

Erin Burger was named Player of the Match for the Proteas after a strong performance at C.

Neville’s side will now stay on in New Zealand to continue their tour and face the Silver Ferns in a three-match International Series for the Taini Jamison Trophy.

They have a couple of days to dust themselves down and regroup ahead of the Series getting underway on Thursday 7th September.