The England Roses put in a tremendous performance as they overcame world no.2s New Zealand Silver Ferns on home soil in Auckland to win their second Quad Series match 49-45. 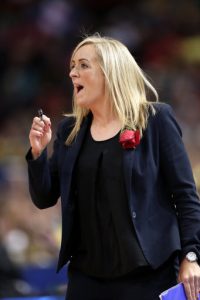 A stellar final 15 minutes from the Roses secured only their fifth ever win over the Silver Ferns in 88 matches.

Tracey Neville opted to start with the seven players who were on court in the England Roses’ spirited second-half fightback against the Australian Diamonds.

The Roses got off to a strong start and showed good movement on court. Serena Guthrie picked out Kadeen Corbin who reached Helen Housby with a looped pass and she opened the scoring.

Corbin and Housby continued to combine well in the circle but were unlucky to see several efforts fail to drop in and didn’t often get a second bite of the cherry with Katrina Grant strong on the rebound.

The Silver Ferns were criticised for not getting enough ball in their Quad Series opener on Saturday but were certainly much improved in this area against the Roses.

Grant, who made three intercepts throughout the game, plucked the ball effortlessly out of the air to set the Silver Ferns on their way as their defensive pressure was rewarded.

The hosts had established a four-goal lead by the end of the first quarter but heads didn’t drop in the Roses team and they clawed their way back.

Housby found her rhythm and hit her stride in quarter two and three unanswered goals from her brought the Roses back to within one.

They worked as a unit and when the ball was fed through to Corbin, she held her nerve to fire the Roses in front at 19-18.

There was a lot of to-ing and fro-ing between the two sides and the volume inside The Trusts Arena went up a notch as the Silver Ferns pulled away to lead 26-23 at half-time.

The hosts picked up where they left off at the end of quarter two and led by five until Corbin found her range to end the Silver Ferns’ goal-scoring run.

Midway through the quarter, Ama Agbeze was replaced by Eboni Beckford-Chambers at GD as the Roses trailed 32-30.

Guthrie was in the thick of the action, either picking up every second pass or driving through court to draw out a defender and open up room for Chelsea Pitman.

The C displayed great vision and delivery with an inch-perfect pass to Corbin to score from mid-range and level the match at 34-34.

With seconds left on the clock in quarter three and things all square at 36-36, Bailey Mes scored from under the post to hand the Silver Ferns a slender one-goal lead going into the final 15.

The Silver Ferns flew out the traps and built up a three-goal gap at 40-37 but the resilient Roses didn’t falter and kept plugging away to bring it back to 42-42 midway through the quarter.

As the clock ticked down and the tension mounted in Auckland, the nerves were starting to show with unforced errors from both sides.

But the Roses kept their cool and there was no looking back when a Geva Mentor tip disrupted the Silver Ferns’ attack and the ball was transitioned through court to Housby, who scored with aplomb.

Momentum was well and truly with Neville’s side in the final few minutes as Corbin capped a fantastic team effort with three unanswered goals.

Chelsea Pitman was named Player of the Match for the Roses after a hugely impressive performance at WA.

The Roses will now travel to Invercargill, where they’ll face the rapidly-improving South Africa Spar Proteas on Sunday in their final match of the Netball Quad Series.

Neville’s side will be determined to build on their impressive performance and end their competition on a high against the current world no.5s.

But they’ll certainly hope to avoid a repeat of the drama from the last time the two sides met – it took a first-ever extra-time in the Quad Series to separate the sides as the England Roses sealed a 60-55 victory.

Meanwhile, New Zealand will go head-to-head with Australia as the competition draws to a close.

You can find more stats here.