England secured the bronze medal at the EuroHockey Championships in Amsterdam with a 2-0 victory over Germany. 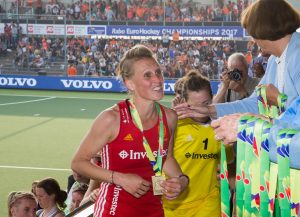 Goals from Hannah Martin and Alex Danson either side of the half-time break guided England to the win in a controlled performance from start to finish.

The medal means that England’s or Great Britain’s women have now won at least one major medal for nine years in a row.

Hollie Webb said: “I’m really proud of the girls. We battled very hard in the semi final, so we really picked ourselves for today’s game and we were so determined to leave with a medal.

“This group of players is so exciting. There is so much more to come from us, we have shown some of it here but it’s just the beginning. 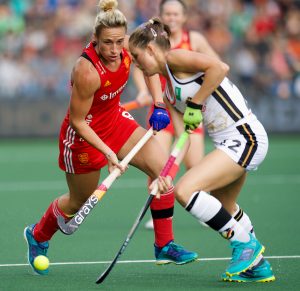 “This time next year we’ve got the World Cup in London, and we’re so excited. The atmosphere over here has been incredible, we can only imagine what that will be like on home soil.”

The opening exchanges were understandably tight between two well-matched sides, chances were hard to come by as the teams largely cancelled each other out.

It was Germany who created the first clear cut chance though. Anne Schroder found room in the circle but Maddie Hinch was equal to her shot. England responded strongly and won three penalty corners before the first break but weren’t able to pull ahead.

The end to end nature of the game continued, Alex Danson collected in the corner before crossing to Sophie Bray but her effort flew just wide of the post. Immediately after at the other end Hinch was called into action again but she saved strongly with her feet once more.

On the stroke of half-time England managed to move in front through Hannah Martin. Ellie Rayer broke from midfield with the ball before finding Martin in the circle, she moved to the keeper’s left before hammering into the backboard to give England the lead.

A quiet third quarter followed as both defences stood firmer and chances were kept to a minimum as England headed into the final 15 minutes with their 1-0 lead still intact.

With Germany chasing a way back into the game and England working to hold onto their advantage the contest became a scrappy one, however with five minutes to go England doubled their lead. Bray made a clever run along the baseline before crossing to the near post where Danson was on hand to lift past the keeper.

Germany removed their keeper for a kicking back and did have the ball in the back of the net, however it was disallowed for a back stick as England saw out the remaining minutes to secure the bronze medal.