With Saturday 19 August marking a year since Great Britain’s women’s historic gold medal at the Rio Olympic Games, and with five years having now passed since the team’s bronze at London 2012, England Hockey can announce a significant, continued growth in the sport both on and off the pitch.

• 10,000 more players in hockey clubs straight after the Rio games.
• Since the eve of London 2012, the number of young girls playing the sport has doubled.
• In that period there has also been an 80% increase in the number of boys and girls in clubs, as well as a 54% increase in players over the age of 46.
• 10,000 tickets sold for Hockey Women’s World Cup 2018 in London in first hour of priority window, leading to England Hockey’s first ever public ticket ballot, starting this Saturday 19th August 2017.
• England Hockey were named 2017 National Governing Body of the Year
• England’s women’s team begin their EuroHockey Championship title defence in Amsterdam on Saturday, and the men look to build on their recent World Cup qualification when they get underway on Sunday. 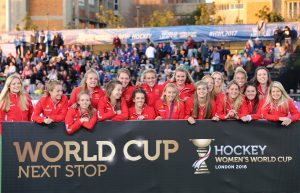 Hockey is clearly benefiting from a double Olympic legacy; after the Great Britain’s women’s team won bronze in front of a home crowd in London in 2012 and an historic gold in Rio in 2016, this has inspired the nation to get active and play hockey. Thanks to the outstanding work of the network of clubs across the country, England Hockey has seen unprecedented growth at both ends of the age range.

England’s hundreds of hockey clubs continue to offer inviting, easy access, aided by projects such as HockeyFest and Back To Hockey which help create an open door policy for all ages. As a result, the average club size has grown 54%.

The growth in the sport since the eve of London 2012 has been seen across the country, examples being a 110% increase in under 16s club participation in London, and a 111% growth in the North West in the same age bracket.

Chief Executive Sally Munday said, “When London was awarded the 2012 games, we saw it as a huge opportunity for the sport, and I believe our strategy has taken full advantage of the platform that we have been given with this double Olympic legacy. In particular I am of course delighted to see the growing numbers of both young girls and boys because they are the future of our sport. Hockey is hugely accessible to both genders and all ages, as also shown by the rise in number of players over 46. With participation growth, back-to-back Olympic medals and a home World Cup on the horizon, there are a great number of reasons to be very optimistic about hockey’s future.”

Development Director Rich Beer commented, “Across the board we are seeing excellent growth, which is the result of a concerted, sustainable strategy. Through Quicksticks we have assisted primary schools’ access to hockey, and our clubs & volunteers continue to provide fantastic experiences. New people are joining the sport, and crucially we are seeing people return to hockey, often the parents of a young player which makes for an outstanding family experience. With the invaluable assistance of Sport England, the results are even more pleasing given that the sports marketplace is becoming much more competitive than ever before. All concerned have done a fantastic job in bringing this growth to fruition, and now we have a great opportunity to sustain it for years to come.”

Rio gold medallist Alex Danson said, “These numbers genuinely come as wonderful news to me and every one of my teammates. We set out to Inspire The Future, and to learn that there are so many more boys and girls playing since before London is absolutely amazing. Nothing makes me quite as proud as winning a gold medal – but honestly these figures come pretty close! With a home women’s World Cup in London next summer, the opportunity for sustained growth has never been greater.”

If you wish to pick up a stick, either for the first time or as a route back into the sport, find out where to play near you at: http://englandhockey.co.uk/playhockey . Starting this Saturday, clubs are also running HockeyFest open days – find your nearest location at http://hockeyfest.hockeynation.club/hockeyfest-events/

The Hockey Women’s World Cup 2018 ticket ballot will open on Saturday 19 August, fans can register here to receive information: http://fih.ch/events/world-cup/world-cup-2018/events/ticket-sign-up-form. The World Cup takes place at the Lee Valley Hockey and Tennis Centre on Queen Elizabeth Olympic Park, from 21 July to 5 August 2018. With just three England pool matches, tickets to see the England team will be like gold dust.

All games take place at the Wagener Stadium in Amsterdam, live in the UK on BT Sport.

In the absence of Head Coach Danny Kerry, who is recovering from illness, England’s women will be led by Assistant Coach David Ralph. The former Scotland international will lead England against the country of his birth in Tuesday’s final Pool game. Bobby Crutchley leads the men’s team and is aided by new Assistant Coach Russell Garcia, Great Britain’s youngest hockey gold medal winner at Seoul in 1988.