University of Bath-based Eilidh Doyle and Emily Diamond helped Great Britain end London 2017 on a memorable note as they won a superb silver in the women’s 4x400m relay on the last night of the IAAF World Championships. 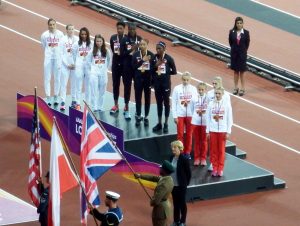 British Athletics team captain Doyle, coached by Brian Doyle at the £30million Sports Training Village, built on the excellent work of Zoey Clark and Laviai Nielsen in the first two legs to hand the baton over to Diamond in second place.

The United States were able to maintain their lead and take another global gold but, roared on by another capacity crowd in the London Stadium, Diamond ran superbly to bring Britain home in 3:25.00. Poland took bronze after medal contenders Jamaica pulled up on the second leg.

It was a step up on the bronze that Doyle and Diamond won in the Rio 2016 Olympic Games and, along with a third-placed finish for the men’s 4x400m quartet in the last race of the night, helped Britain achieve their pre-championships target of six medals.

Doyle said: “It was a really great ending to what has been a great championships. We knew we were capable of getting a medal but it was going to be tough, so to go out there and win silver was just incredible.

“I didn’t even realise that Jamaica had pulled up, Laviai was the only one to clock it as it was on her leg. You are so focused on being in the right position and doing your job that it was only when Emily crossed the line that I was working out where everybody else was!”

The British captain added: “I am so proud of this team, we have done a really good job. We have made our medal target but we have also had some excellent results. I urge people to look at the bigger picture and how many athletes have finished higher than they were ranked going into the championships.”

Diamond, coached remotely by Jared Deacon at the University, was thrilled to be back on the podium and believes the British quartet will keep improving.

“It’s amazing to do a lap of honour anyway but to do it in front of a home crowd is incredible,” she said.

“Last year was such an out of the blue experience, I would never have expected to go to Rio at the start of the year and get a medal. This year, with it being in front of a home crowd, we came in maybe with slightly different expectations.

“I think we are getting so much more confident and we noticed in the heats that we were closing the gaps on the Americans. We just need to believe in ourselves a bit more – yes they are phenomenal athletes but we are all great athletes as well and we just need to have that faith in ourselves.”

Earlier in the evening, University of Bath Sports Performance graduate Danny Talbot and his GB 4x100m relay team-mates had received their gold medals to rapturous applause from another sell-out crowd.

For more information about the athletics programme at the University of Bath, visit www.teambath.com/athletics.