Opening Boundaries, a charity set up to showcase women in sport and promote gender equality will be teaming up with the UK Armed forces to play a charity cricket game under banner of Bowling Out Domestic Violence at the Royal Chelsea Hospital prestigious Burton Court Cricket ground on the 13th August. 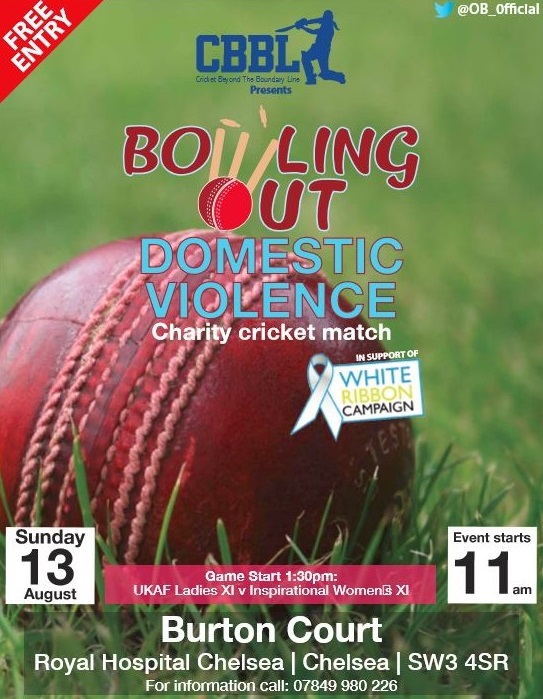 The format of the day starting at 11:30am will consist of junior activity with main game been played by the UKAF women’s XI versus Opening Boundaries Inspirational Women’s XI.

Now in its second year and hoping to become an annual fixture between the two teams, the game holds a special significance as the Inspirational XI team which consists of women from Pakistani and Indian background who celebrate 70 years of independence. To commemorate this milestone the UKAF have called upon an 18 man military band to play each country’s national anthems as a show of respect and positive relations around the development of women.

However, whilst sports events aim to promote values of fairness, there is also a dark side. According to remarks by UN Assistant Secretary-General and UN Women Deputy Executive Director Lakshmi Puri , Violence against women and girls occurs in all countries and happens in many situations, including in relation to sports events.

Evidence from the UK suggests that domestic violence increases during world cups or when the home team loses. Trafficking in women and children for sexual exploitation vastly increases during sporting ‘mega events’ such as the Olympics and World Cups.

Halima Khan, MD of Opening Boundaries commented saying: “Sporting events like this provide us with a great opportunity to positively engage and build partnerships with different audiences and teach everyone that gender-based violence has no place in the sporting world, on or off the field. We should be teaching everyone from playground to podium that through the empowerment of women and girls we can truly create an equal playing field.”

“This is a free event and I hope people can come down and show their support towards women’s equality and help to raise awareness of a serious issue through sport.”

This game has come at a very important time as coverage of women’s sport is more visible today than at any previous point in history, you only have to look at the record breaking viewing figures at the recent women’s cricket world cup held in the UK where England were crowned winners.

There is also substantial evidence that sports participation by females can help break down prejudice and gender stereotypes whilst at the same time build self esteem, positive body image and contribute to the development of leadership skills, and these are the key messages of this game.

Opening Boundaries would like to  thank all its sponsors including Metis Law, Schofield Sweeney, Mark Brearley Solicitors, Overland development, Jinnah Restaurant and the UKAF for their continued support towards raising awareness of women in sport and gender equality.