England cruised to a 4-1 win in their quarter-final match with India at the Hockey World League Semi-Finals in Johannesburg. 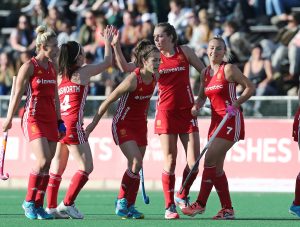 England will face the USA at either 3:45pm or 6pm UK time, and in reaching the final four England have also secured qualification for the World League Finals to be held in New Zealand in November.

Straight from the start England looked to stamp their authority on the game pushing India deep into their half from the get go. This soon resulted in a flurry of penalty corners and although these were not converted, at England’s fourth penalty corner they were awarded a penalty stroke.

Having missed earlier in the tournament, Ansley stepped up and made no mistake, pushing her effort inside the right hand post where she had missed against Poland. England’s lead was soon extended. A fine flowing move down the right saw Susannah Townsend’s cross deflected into an Indian defender before Danson reacted quickest to spin and hammer home before the first break.

India responded in the second quarter showing some resilience after a tough opening. They began to exert pressure on the England backline and struck the post from a well worked penalty corner but a goal before the break eluded them.

The third quarter was evenly contested between the sides with England happy to sit a little deeper with their two goal lead, however before the final break they grabbed a third goal in style. Martin collected the ball on the right before starting a weaving run which sent Indian heads spinning, her cross through the circle fell to Townsend who turned home first time.

India did grab a consolation goal in the final fifteen minutes through Gurjit Kaur’s drag flick but England responded immediately to make it 4-1 as Martin passed into an empty net with India having elected for a kicking back.

England saw out the closing moments to ensure the win and progress to the semi-finals and book their place at the Hockey World League Finals in New Zealand later this year.

England women’s team Head Coach Danny Kerry will not attend the squad’s remaining matches in the Hockey World League Semi Final due to being unwell.

In Danny’s absence, Assistant Coach David Ralph guided the athletes to a 3-2 win over Ireland on Sunday then a 4-1 victory over India. They now face USA in a semi final on Thursday, with Finals Day taking place on Sunday.