Alex Danson’s 102nd international goal guided England to a 3-2 victory over Ireland and secured a top place finish in Pool A at the World Hockey League Semi-Finals. 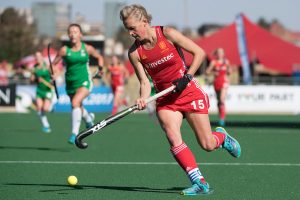 England had raced into a 2-0 half-time lead through Sarah Haycroft and Shona McCallin before Ireland produced a stunning comeback to level after the break.

But Danson’s strike in the 43rd minute restored the lead for her side who saw off late Irish pressure to seal the win and their place at the top of their pool.

Reflecting on the match, goalkeeper Maddie Hinch said: “We came up against a really strong Irish performance. But we didn’t panic and knew that the next goal would be crucial and that we could get it.

“There isn’t much this team hasn’t been through, it was a shock but we remained calm and got the goal we needed.”

The opening exchanges were evenly contested before Ireland created the first chance of the match, but Maddie Hinch was quickly off her line save Anna O’Flanagan.

England responded and went on to look the better side in the opening quarter, forcing a number of dangerous circle penetrations. Shortly before the break England made this pressure count, Sarah Haycroft broke down the right and crossed onto an Irish foot which deflected into the goal.

The second quarter saw England twice go down to ten players which meant they spent the majority of the next fifteen minutes in their own half. However just before the half-time break good work from Lily Owsley won a penalty corner, McCallin popped up at the left hand post to deflect home Giselle Ansley’s dragflick.

After the interval Ireland levelled inside two minutes of the restart to stun England. Firstly Daly’s reverse shot deflected in off Ansley’s stick before Kathryn Mullan’s bobbled shot through a crowded circle snuck past Hinch.

Ireland continued to press but England’s defence held firm and on the stroke of the final break they were back in the lead. From a penalty corner Ansley’s effort was saved but Danson reacted quickest to hammer home the rebound.

In the final fifteen minutes the Irish battled hard to level once again and only some fine defending and standout tackles from Anna Toman and Hollie Webb. Ireland elected for a kicking back in a late attempt to equalise but England held firm.

England will contest their quarter final on Tuesday which will be shown live on BT Sport.