A strike from Mami Karino earned Japan a 1-0 win over England in their Hockey World League Semi-Final clash in Johannesburg. 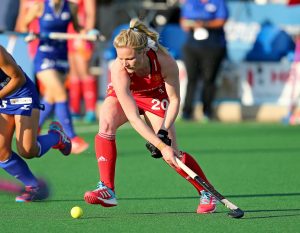 England dominated possession and created a number of chances but weren’t able to find a way through Japan’s stubborn defence.

Of their twelve efforts England found the target five times but found Megumi Kageyama in fine form in the Japan goal, and her late saves saw her side over the line.

Reflecting on the match England head coach Danny Kerry said: “Japan started quicker than us and it was a big contrast to playing a slow game against Poland in our first match.

“In the second half we controlled the game and Japan had little to no opportunity whilst we had a number of chances which just didn’t quite fall right for us.

“Importantly we played well in the second half and we need to focus on that rather than the result.”

It was Japan who carved out the first attempt of the match and with it raced into the lead in just the third minute. From the left wing a cross was crashed across goal causing confusion as Karino made no mistake from close range.

England responded well to the setback and were soon looking at home, dominating possession and creating chances. Sarah Haycroft, making her 50th international appearance, struck into the circle but the ball just evaded both Danson and Bray in front of goal before Jo Hunter’s effort was smothered by the Japanese goalkeeper.

In the second quarter Japan broke out and threatened to extend their lead, but Hinch was quickly off her line and down to save well. England pushed to level but despite their best efforts weren’t able to create a clear cut chance ahead of the half time break.

Japan looked refreshed after the interval and were soon exerting pressure of their own on the English back line.

The final fifteen minutes was all England as they threw everything at the Japanese defence. Lily Owsley danced past two defenders and cut inside before firing wide while Danson’s reverse stick strike was tipped over the bar by the Japanese goalkeeper.

England forced two late penalty corners while Laura Unsworth also had a shot shaved as Japan dug deep and held firm to see out the remaining minutes and claim the win.