17-year-old Green will head into the event in fine form having topped all three Pentathlon GB Under 19 Ranking Competitions this year. Saddleworth’s Green, who finished 5th at last year’s Under 19 World Championships in Ireland, also tasted victory at the GB Youth International, the first youth international of the season before finishing as the top Brit at an Under 19 European Cup event in Barcelona. 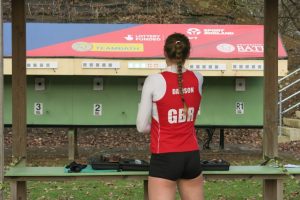 Wycliffe College’s Davison has also enjoyed a strong year, including marking her senior international debut as the Swiss Women International in March with an impressive 6th place. The 18-year-old is currently 2nd on the Pentathlon GB Under 19 Ranking List having finished 3rd at the GB Youth International and collected team medals at both the Solihull event and European Cup in Barcelona.

Georgina Mitchell and Emma Whitaker will both compete in Prague despite still being in the Under 17 age group. However, both athletes have enjoyed stellar seasons and currently sit 3rd and 5th respectively on the Pentathlon GB Under 19 Ranking List.

Plymouth College’s Mitchell has been in fine form for the past 3 weeks, claiming victory at the British Under 19 Modern Pentathlon Championships before finishing as the top British athlete in 11th at the Under 17 European Championships in forty-degree heat in Bulgaria. The 16-year-old was also part of the bronze medal winning team alongside Green and Davison in Barcelona.

Meanwhile, 16-year-old Whitaker has fared particularly well domestically in 2017, winning the British Under 17 Modern Tetrathlon title before claiming bronze at the British Under 19 Modern Pentathlon Championships. Whitaker, who currently trains with City of Lancaster Triathlon and Rossall Pentathlon Academy finished 12th in the Under 17 European Championships at the end of last month, backing up her 6th place finish on home soil 12 months earlier.

Ampfield’s George Budden will lead a youthful boys’ line-up in the Czech capital after a consistent season so far. The 17-year-old finished 8th at the GB Youth International and 7th at the European Cup in Barcelona before tasting victory in the British Under 19 Modern Pentathlon Championships. Budden also made his full modern pentathlon international debut in April, finishing 30th in a strong field at the German Open Championships.

Ashford Modern Pentathlon Club’s James Wilton booked his place in the team with victory at the final Under 19 ranking competition in June, propelling himself into 3rd on the Pentathlon GB ranking list. The 17-year-old has had a strong season after illness interrupted the beginning of his year, enjoying victory at the British Under 19 Modern Tetrathlon Championships before finishing as the 3rd highest Brit at the Barcelona European Cup.

Yorkshire Pentathlon Club’s Price has been consistent throughout 2017, finishing 2nd, 3rd and 4th at the three Under 19 ranking competitions and 1st and 2nd at the two Under 17 Ranking competitions. The 16-year-old also finished as the second highest placed Brit at both the European Cup in Barcelona and last month’s Under 17 European Championships in Bulgaria.

The competition begins with the Girls’ relay on Tuesday 18th July and concludes with the Mixed Relay on Monday 24th July.