British No.1 and world No.7 Lucy Shuker (pictured above), singles semi-finalist at the Australian Open in January, begins her ninth Wimbledon with a ladies’ singles match-up against current world No.1 Yui Kamiji of Japan.

Shuker is one of four Brits on the Tennis Foundation’s Wheelchair Tennis World Class Programme playing at the third Grand Slam of the year this time, along with Gordon Reid, Alfie Hewett, and Jordanne Whiley.

Shuker arrives at The Championships with recent grass court success behind her after reaching the women’s singles final and winning the women’s doubles with Dutchwoman Diede de Groot at last week’s inaugural Surbiton Wheelchair Tennis Tournament.

Shuker was runner-up to world No.3 de Groot in singles. “Having the event at Surbiton was a great initiative by the Tennis Foundation to provide players the extra opportunity to play on grass. It gave me some valuable match time in singles and doubles and I feel pretty confident for this week.” said Shuker.

“I started 2017 by taking Diede to three sets on two occasions, I beat Marjolein Buis (world No.6) at the Australian Open and I’ve beaten Aniek van Koot (world No.4) twice. So I’ve had some really good results against the top girls, which is really exciting, but you have to be the better player on the day. Every match that gets drawn is going to be a tough match as it’s the top eight that qualified and all I can do is go out there, enjoy it and do my best.” 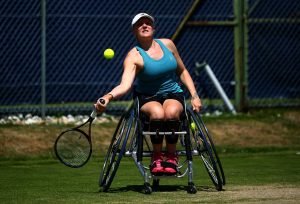 Shuker met Jordanne Whiley in all-British ladies’ singles first round contest in 2016. Whiley, the 2015 US Open champion, will bid to reach the Wimbledon semi-finals for the second successive year when she plays Dutch world No.3 de Groot on Thursday.

“Wimbledon is my favourite Grand Slam and I’ve got lots of super memories from the last few years, so obviously I want to do well and I’ll be giving it my all,” said Whiley. “I’m really excited to be playing back here with Yui in doubles, too. We’re not seeded this year as my ranking’s dropped, but we’ll be doing our best to get that fourth doubles title.”

Whiley and Kamiji made history in 2016 by becoming the first partnership to win a hat-trick of Wimbledon ladies’ doubles wheelchair tennis titles.

As they are unseeded this year the reigning champions face top seeds Jiske Griffioen and Aniek van Koot in the semi-finals after playing the Dutch duo in each of the last four Wimbledon finals.

Shuker and Germany’s Sabine Elllerbrock also face all-Dutch opposition in the other semi-final when they take on second seeds Marjolein Buis and de Groot.

The 25-year-old made history in 2016, winning the inaugural Wimbledon wheelchair tennis men’s singles title.“I’ve got great memories of last year and the home British crowd were a huge part of that. Hopefully that can only get better and better as the profile of wheelchair tennis goes up and up and I’m really looking forward to experiencing that again,” said Reid.

Reid is drawn in the opposite half of the draw to fellow Brit and Roland Garros champion Alfie Hewett.

Hewett, 19, plays Nicolas Peifer of France in his bid to reach the semi-finals and goes into the contest having won four of his last six matches against Peifer. “I’m focussed on one match at a time and really want to get my first singles win on the grass at Wimbledon, so I’m really looking forward to playing Nico.

“Overall I’ve got a good record against him and won our last match in May and beat him on the way to the Paralympic final in Rio,” said world No. 6 Hewett, who will begin his third Wimbledon having been named International Paralympic Athlete of the Month for June after winning his maiden Grand Slam singles title in Paris last month.

As well as Reid bidding to defend his title in the men’s singles, Hewett and Reid also go into Wimbledon this year as reigning men’s doubles champions. They begin their title defence against Gustavo Fernandez of Argentina and Shingo Kunieda of Japan.

“Doubles is going to be another tough opening match but me and Gordon are really up for defending our title and, again, are taking it a match at a time,” added Hewett.