James Bailey has named his squad for the second and final leg of the Rugby Europe Women’s Grand Prix Series in Kazan, Russia this weekend (8-9 July, live on RugbyEurope.tv).

Bailey makes one change to the squad that placed 4th in the first leg of the Rugby Europe Women’s Grand Prix Series in Malemort in June. 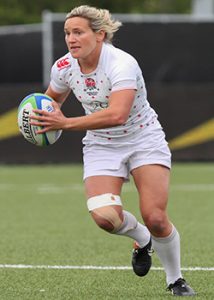 England are drawn in Pool C alongside Sweden, Poland and Ireland, kicking-off against Sweden, who took home the Rugby Europe Women’s Grand Prix Series Challenge Trophy in Malemort, on Saturday at 9.50am BST.

England Women Sevens coach James Bailey said: “We have full confidence in the side selected which combines the experience of players who have played in major tournaments such as the Olympics, with younger players who have made their mark this season and bring a lot of energy to the side.

“Going into Kazan it’s now about translating what we have been working on over the past season into consistent performances across the weekend that deliver results.”

The top two teams across both legs of the Rugby Europe Women’s Grand Prix Series, based on an amalgamation of points, will secure a place in the Rugby World Cup Sevens in July 2018.

The two-part European series provides England with their final chance to qualify for the Rugby World Cup Sevens. England currently sit in fourth position, behind qualified teams Russia and France, with Ireland in third going into the second leg of the series.

Schedule Pool C (all times in BST and games available via RugbyEurope.tv)