Laura Marsh returned to the side and took four wickets as England completed a comfortable seven-wicket victory over Sri Lanka at Taunton in their third ICC Women’s World Cup fixture.

Marsh, who was Player of the Match, and the rest of England’s bowlers restricted Sri Lanka to 204-8 before captain Heather Knight (82) and Sarah Taylor (74*) combined to put on 148 and help England towards their target. 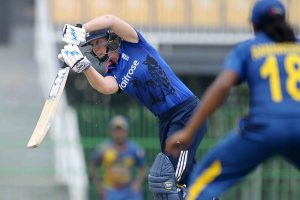 England’s next fixture comes against South Africa at Bristol on Wednesday July 5, before taking on Australia at the same venue on Sunday July 9.

It was easy to be happy as the sun shone on Taunton, but England gave a crowd of 3,426 plenty to cheer as they roundly beat Sri Lanka to take great confidence into a crucial week of World Cup cricket.

Heather Knight continued her reliable form with the bat, but there was a statement of form from Sarah Taylor both at the crease and behind the stumps, four wickets from Laura Marsh, and Lauren Winfield returned with an encouraging cameo, as England dominated most of the game.

Sri Lanka won the toss and Inoka Ranaweera decided to bat on a used wicket, an easy decision. The new opening pair of Hansika and Perera didn’t score a run for the first three and a half overs, but back to back fours off Anya Shrubsole by Perera got them going and once they were moving they showed good intent against the new ball, putting on 44 from 12 overs.

Katherine Brunt was unlucky not to take a wicket on her birthday, bowling with discipline to go for just over two an over in the match, but it was to be the change bowlers who made the breakthrough.

Nat Sciver showed she’s got plenty to offer with the ball as well as the bat; she got Hansika caught by Fran Wilson, and followed up with the big wicket of Chamari Athapaththu. Sri Lanka’s number three had played the innings of her country’s World Cup so far, an unbeaten 178* against tournament favourites Australia, but she was undone by Sciver’s nagging line and feathered a catch to Sarah Taylor, standing up to the stumps, the first of three Sri Lankans to fall in that manner.

Laura Marsh was one of two changes to the side who faced Pakistan, with a fit-again Lauren Winfield also coming in as Jenny Gunn and Alex Hartley made way. Replacing Sciver, Marsh bowled ten consecutive overs from the River End and took four wickets. The most important of those was the experienced Siriwardene, bowled for 33 when looking to take the attack to England, but she did a sterling job for her captain who was eager to praise her spinners after the match.

Knight on England’s spinners: “We have two world-class off spinners with Alex Hartley, offering something different, also bowling well. It was great to see Laura come in and bowl so well and it wasn’t until we batted that we realised how well we’d done to keep [Sri Lanka] to that score.”

Sri Lanka closed their innings having scored 204 from their fifty overs, finishing eight down, unable to accelerate to a sufficient degree. The only concern for England will be some of the rough edges in the field, including two dropped catches in one Anya Shrubsole over that could have proved more costly had Kanchana had more time to take advantage.

England’s chase of 205 started in positive fashion with Lauren Winfield taking particular exception to any errors from the Sri Lankan openers; they had reached 33 from 5.1 overs when Beaumont was trapped in front by Kanchana. Winfield followed two overs later, trying to pull a ball that wasn’t quite short enough, Kanchana again getting the wicket.

There was still an air of confidence in the ground as Heather Knight joined Sarah Taylor, and it felt like no time at all before they both passed fifty. There was some great stroke-play, a mixture of power and finesse, including some sweeps and scoops, as they made light work of adding 148 in 22.2 overs. Knight’s departure for 82 came as the two were clearly making an effort to finish the game quickly, hoping for a boost to England’s net run-rate which could prove crucial in a tight race for semi-final places.

Sarah Taylor then finished the Sri Lankans off before Nat Sciver could even face a ball. Her x-factor, both behind the stumps and with the bat, put a gloss on this victory as England approach a trio of games against stronger opponents. Next up will be South Africa at Bristol on Wednesday, and they showed their pedigree by routing the West Indies, before arguably the two strongest sides in Australia and New Zealand.

The Autumn Programme fights for Survival.

Three Red Roses nominated in Player of the Decade Awards.

Lewandowski and Pernille Harder voted UEFA Players of the Year.