A commanding display saw Clitheroe’s Murray lead throughout the day to take victory ahead of Gravesend’s Kate French and Dumfries’ Jo Muir. In the men’s event, Cheltenham’s Cooke came out on top of a titanic tussle between himself, Tom Toolis and Joe Choong with Romford’s Tom taking silver and Orpington Joe’s bronze.

Murray, who claimed her third British Pentathlon title with victory reflected “I’m delighted with my performance today as I had an all-round strong day across all 5 disciplines. I’ve worked really hard over the past 6-8 weeks so it’s nice to see some positive results in the competition.”

The former Ribble Valley Modern Pentathlon Club athlete added “Being 2017 British Champion is a great honour and I’m really proud of this achievement.

“It’s always great to win a title and it’s really fulfilling to do this in front of my friends and family at my home training ground.”

Meanwhile, reflecting on his first ever British crown, Cooke commented “I’m really pleased to win my first National Pentathlon and especially proud to do it whilst wearing my Dorothy House vest.

“It was great to see so many younger athletes having a go at the Laser Run which was running throughout the day and then staying to support both the Men and Women at the end of a long day.”

The day began in the University of Bath London 2012 Legacy pool where London silver medallist Murray produced a season best time of 2:11.74 to take an early lead ahead of Buckinghamshire’s Sarah Collin and Yorkshire’s Georgia Pipes.

It was also 27-year-old Murray who headed proceedings in the fencing salle, picking up 29 victories and just 5 defeats from her 34 bouts. Fellow Rio Olympian Kate French picked up 27 victories with Dorking’s Francesca Summers and Bristol’s Charlie Follett both securing 24 victories.

The ride at Hill House Farm did little to change the order with most athletes negotiating the tricky show-jumping course well. However, a perfect clear round by Georgia Pipes moved her up to 4th ahead of the laser run, behind Murray, French and Summers.

With big gaps at the top of the leaderboard going into the final discipline, good running and shooting meant Murray comfortably held on to her lead to become the 2017 Women’s British Modern Pentathlon Champion. 26-year-old French had a similarly comfortably final discipline on her way to silver with the real battle behind for the final podium place. In the end, it was a scintillating laser-run from 22-year-old Muir that propelled her into the bronze medal position, crossing the line 5 seconds ahead of Summers in 4th.

Somerset’s Holly Parker finished 5th with Peterborough’s Jess Varley 6th after making up huge ground on the laser run thanks to the second quickest time of the day in the run-shoot discipline. Charlie Follett, who moved to Pentathlon GB’s National Training Centre at the University of Bath in September, finished 7th with Oldham’s Olivia Green, still an Under 19 athlete, 8th. Another two Team Bath athletes, Georgia Pipes and Sarah Collin rounded out the top 10.

In contrast to the Women’s event, the Men’s competition saw the leading positions changing throughout the day. Olympic Modern Pentathlon Record holder Cooke showed his prowess in the pool with his time of 2:01.40 quickest of the day, just over a second clear of Basingstoke’s Bradley Sutton with Tom Toolis 3rd in the opening discipline. 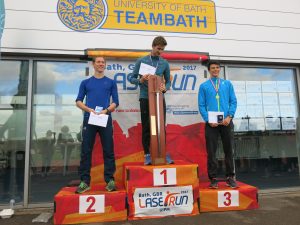 It was fellow Rio Olympian Joe Choong who set the standard in the fencing salle, with the Orpington born athlete picking up 28 victories and just 6 defeats. Romford’s Toolis was 2 victories further back in second with Cheltenham’s Cooke securing 24 victories to finish the discipline standings 3rd. It meant Choong topped the overall standings after two disciplines with Toolis and Cooke close behind.

In the ride, 17-year-old George Budden produced the best round, picking up just 2 time faults to secure 298 points. Junior trio Paddy Erskine, Bradley Sutton and Kieran Harby each knocked down a single pole to pick up 293 points. Of the leading trio, it was Toolis who fared best, 7 fence penalties and 3 time penalties meaning he picked up 290 points. The gaps were small once again though with Cooke securing 285 points and Choong 279.

It meant Toolis had the lead heading into the laser run, but he started with just a 6 second lead over Choong with Cooke 2 seconds back in third.

A fascinating laser run ensued with the trio still unable to be split after the opening three shoots and three runs. However, it was on the final visit to the range where Cooke made his decisive break, a rapid final shoot giving him an advantage that he wouldn’t relinquish.

The 2016 World Cup Final winner pulled further clear on the final lap, taking the British title by 15 seconds from Toolis with Choong 3rd.