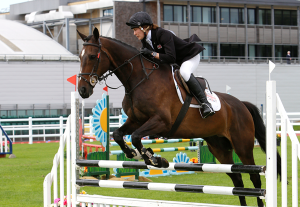 Kate French has topped the 2017 Women’s World Cup standings at the end of the four regular season events. The 26-year-old has enjoyed a remarkable beginning to 2017 with 1st, 2nd and 6th place finishes in her three World Cup events, placing her 9 points ahead of Turkey’s Ilke Ozyuksel at the top of the standings.

Gravesend’s French began the season in fantastic form, recording her best ever World Cup result with a silver medal at the opening event of the year in Los Angeles. The Rio Olympian then went one better in Cairo, claiming her first ever World Cup victory by an astonishing 30 seconds margin. French culminated her World Cup season in Hungary with another strong performance and a 6th place finish in a high-quality field.

On her incredible World Cup form, French commented “It’s a great feeling to finish top of the World Cup standings! I’m particularly pleased with the consistency of my fencing so far this season as I’ve struggled with that in the past.”

Reflecting on her preparation for the 2017 season, French added “Last year was a really important season which meant it was quite a stressful year. I think I gained a huge amount of experience from that, as well as competing in Rio.

“Coming back into training this season after a slightly longer break than usual, it was really nice to be able to re-focus and set new goals for myself.”

Just 36 athletes will compete at the World Cup Final in Lithuania with Jo Muir (9th), Sam Murray (22nd) and Frankie Summers (25th) all also comfortably inside the top 36 at the end of the regular season. In the Men’s standings, Sam Curry (30th) also makes the cut.

However, each National federation can only send a maximum of 2 female and 2 male athletes to the World Cup final, meaning the Pentathlon GB Selection committee will have to decide which of the 4 girls to enter into the Women’s field, if any.

Dumfries’ Muir has enjoyed an extremely consistent World Cup season with three top 16 finishes in her three events, culminating with a career-best 10th at last week’s competition in Poland. Clitheroe’s Murray also saved her best until last with an 18th place finish in Poland backing up 22nd and 27th place finishes in the USA and Hungary. Dorking’s Summers also produced a career-best World Cup result this season when she finished 10th at World Cup 3 in Hungary. The 21-year-old also impressed in Poland, leading the competition after two disciplines before suffering an unfortunate fall in the ride on her way to a 28th place finish.

Peterborough’s Jess Varley and Plymouth’s Kerenza Bryson both made their World Cup debuts during 2017 with 22-year-old Varley finishing 18th at World Cup 1 in Los Angeles and 18-year-old Bryson 26th at World Cup 2 in Cairo, marking their debuts in fine style.

Salfords’ Curry only competed at two World Cups this year but his consistency saw him finish inside the top 30 in the overall standings. The 23-year-old was another Pentathlon GB athlete to enjoy his best ever result at a World Cup when he finished 17th at the season opener in California before crossing the line 18th at the 3rd event in Kecskemet, Hungary.

After a strong performance saw him finish 9th in Los Angeles, injury affected the rest of Rio Olympian Jamie Cooke’s World Cup season meaning he misses out on qualifying for the final. With university studies taking priority, Romford’s Tom Toolis and Orpington’s Joe Choong only entered two and one World Cup event respectively meaning finishing inside the top 36 of the standings was always going to be tough.

The only GB man to make his World Cup debut this season was Plymouth’s Myles Pillage. The 18-year-old who moved to Pentathlon GB’s National Training Centre in Bath last September competed at the individual event in Los Angeles. Myles also competed in three Mixed Relays this year, the highlight being a stunning silver medal alongside Jo Muir at World Cup 2 in Cairo.