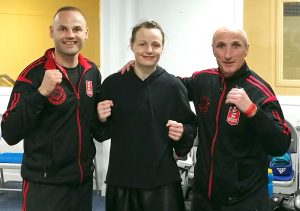 The trophies will be presented at Parley Country Club on Saturday 3 June 7.30 with a buffet and guest speakers and no doubt a large group from both clubs will be there to support the boxers.

On 16th to 18th June the Haringey Box Cup (the biggest tournament in Europe) will take place and this year Arena have entered Hayley Forbes,  Claire Farmer and Raven Chapman.

All three boxers feel they are really hitting their stride and the girls and their coaches are very confident that they will go a long way in the tournament. 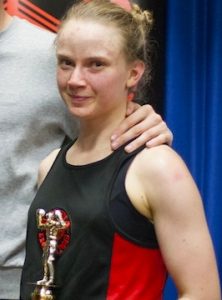 The event was first held in 2008 and from small beginnings has  grown into a fantastic three day spectacle of boxing and Europe’s largest senior open amateur boxing tournament. Each year it attracts over 500 boxers, male and female from 150 boxing clubs across the country and Europe and almost 100 contests each day.  The venue is one of London’s most iconic buildings, the Great Hall in Alexandra Palace.

There are five boxing rings continuously in action for three days, culminating in the finals on the Sunday.

4tlos congratulate Raven and Willow on their awards and wish Hayley, Claire and Raven the best of luck at Haringey.