Opening Boundaries have recently returned from Kenya where they will be taking their #BowlingOutDV campaign to a global stage. The charity’s Chairman and Founder have spent the week in Kenya arranging the schedule which will take place later in the year. 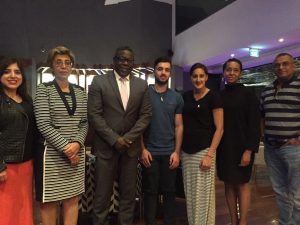 Teaming up with the UK Armed Forces and Cricket Kenya a delegation of 18 Women will travel from the UK with an aim of using the sport to raise awareness of gender based violence and showcasing women into sport.

Founder of Opening Boundaries, Halima Khan commented saying “I am delighted that we have been able to take our campaign to a global scale in a very short period of time, this really shows the power Cricket can have when raising awareness of much needed issues. Over the past week we have been meeting with the Kenyan Cricket Board arranging what will be a fantastic tour and I am looking forward to bringing the team back soon.”

The visit will consist of various cricket games across Nairobi and Nakuru against the national women’s cricket team and visiting local schools and communities to deliver coaching. The tour will also provide the two countries with an opportunity to talk about the success and challenges of women in sport as well as issues of gender based violence sharing best practice and finally culminating in a community #BowlingOutDV festival. The festival will be played by past players and high profile names from Kenya. 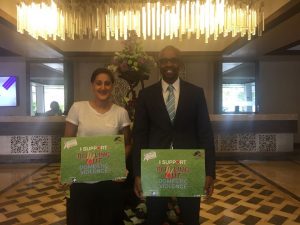 Manager of the UK Armed Forces Team Ros Brown commented on the tour saying “The United Kingdom Armed Forces Ladies cricket are delighted and honoured to be touring Kenya this autumn, in partnership with Cricket Kenya and Opening Boundaries.  Participation in sport is important within the Armed Forces as it builds teamwork, leadership and respect”.

“We are very much looking forward to showcasing the game we love in Kenya and engaging with local schools and communities during our visit.  Sport has the power to inspire and empower women and girls from all backgrounds; it can provide them with a platform to develop and better achieve their potential.  This once in a lifetime opportunity also offers the opening, through sport, to raise awareness of the challenges faced in addressing violence against women and girls.”

Statistics from the latest UN data on different forms of violence against women  and girls in Kenya indicates, forty-five percent of women have experienced physical violence with fourteen percent been sexual whilst twenty-one percent of women age 15-49 have been circumcised (FGM).

Cricket Kenya are looking forward to welcoming Opening Boundaries and the UK Armed Forces ladies team to showcase women In sport as well as highlight issues around female empowerment. The president of Kenya Cricket Jackie JanMohammed leads by example as the first ever women in the world to be elected at the top post of a national board.  Most recently Jackie has also been appointed as president of Cricket Africa, another milestone for the trailblazer.

Cricket has some amazing values and qualities which can lead to helping and supporting people who need it the most. All parties involved hope the tour allows both the UK and Kenya to share and learn from each other on the power of sport as a positive tool for social change.

The tour will be adapting the global White Ribbon symbol of anti-violence against women and girls.