Senior players from all six Kia Super League teams travelled down to the 1st Central County Ground, Hove today (11 May) to celebrate the on-sale date for tickets for this year’s competition. 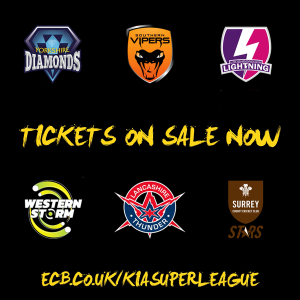 Tickets are available to buy from today here. They are designed to be affordable with prices as low as £10 for families, £5 for adults and £1 for children.

The event feeds into an exciting summer of women’s cricket with the ICC Women’s World Cup due to reach its thrilling finale just weeks before the start of the second Kia Super League – ‘where the world’s best will play this summer’. Fourteen venues are to be used across the fixture list this year, up from nine in 2016.

A local Sussex graffiti artist celebrated the on-sale date with an artistic interpretation of the Kia Super League logo which will be displayed at the 1st Central County Ground, Hove throughout the season.

The six Kia Super League teams will be battling it out from 10 August on the ‘Road to Hove’ as they attempt to reach finals day on 1 September later this year.

It was great to see so many kids and families at grounds across the country last year and we hope to see even more people supporting the teams and the competition this year.”

ECB’s Director of England Women’s Cricket, Clare Connor said: “The Kia Super League is a key part of a fantastic opportunity this summer. The KSL will showcase our sport, grow our participation base, reach new audiences and inspire more fans than ever before to watch and get involved with women’s cricket.

We have already seen the competition improve the quality of premier domestic women’s cricket in England. The interest from the first year showed us what was possible with the tournament and we have a great base to continue to grow and develop the KSL.”

Kia Super League will feature on television and radio this summer with Sky Sports providing live coverage of six ‘double-headers’ alongside NatWest T20 Blast matches. They will also broadcast finals day, with BBC Radio covering every round of matches, alongside finals day.