The Arena Boxing Club in Bournemouth are holding their annual Boxing and Dinner event tomorrow Saturday 6th May. This fund raising event will take place at the Bournemouth Highcliff Marriott Hotel, doors open at 7.30 and boxing commences at 8pm 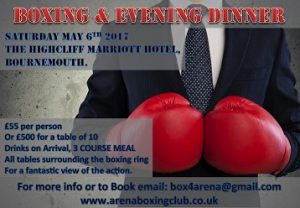 Tickets are available on the door, or in advance from the gym (at the beginning of sessions) As a spectator entry is just £5 for 12yrs and under (proof & accompanied by an adult),  £15.00 all others.

All monies raised will go to the running of the Arena Boxing Club, which is runs by volunteers and is a not for profit Amateur Boxing Club.

The evening will feature top female & male Boxers from the National Governing body for Boxing. England Boxing including a least ten of Arena’s own boxers.  Female boxers currently lined up to compete are Arena’s own Claire Farmer, Bethany Gaze from Gosport ABC, Rosie Ratzer from Gosport ABC and Abby Lea of Woking ABC.

You can see more about the event on Arena’s  Facebook page here. 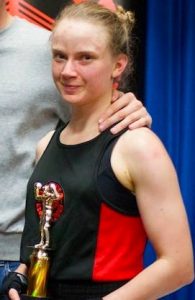 This event was first held in 2008 and from small beginnings has  grown into a fantastic three day spectacle of boxing and Europe’s largest senior open amateur boxing tournament. Each year it attracts over 500 boxers, male and female from 150 boxing clubs across the country and Europe and almost 100 contests each day.  The venue is one of London’s most iconic buildings, the Great Hall in Alexandra Palace.

There are five boxing rings continuously in action for three days, culminating in the finals on the Sunday.

We wish them all the best of luck.