“I’m so, so happy – I didn’t think I’d run that quick,” said Chalmers, coached by James Hillier. “I thought maybe it would be 46.1 or 46.2 but when I saw the clock it was just ridiculous. 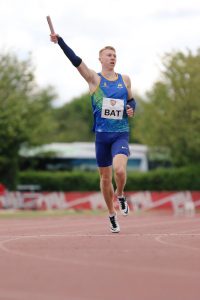 “I’ve been pretty nervous all weekend. I’ve been dying to open [the season] because I’ve been training so well, no niggles and dropping some really fast times in training.”

Webster, coached by Colin Bovell, was also a bronze-medallist in the 400m hurdles, clocking 53.03.

Olivia Caesar (Sport & Exercise Science), also coached by Bovell, was runner-up in the women’s 400m final in 54.11 and was also a silver-medallist in the 4x400m relay with Rachel Donnison (Natural Sciences), Amy Jaramazovic (Psychology) and Isobel Ives (Civil Engineering).

Ives also claimed 800m bronze in 2:09.27 and there were a host of further top-five finishes and personal bests for the athletes in Blue and Gold as they finished fourth in the overall points standings.