England badminton stars Rajiv Ouseph and Chris and Gabby Adcock have been crowned 2017 European Champions in Men’s Singles and Mixed Doubles respectively today as a nine year wait for a title came to a sensational end.

England have consistently medalled at the Europeans in recent years but were without a gold since 2008. But today, playing against Danish opposition in front of a Danish crowd, England rewrote a small slice of history by winning double gold – a feat that has not been achieved for 29 years. 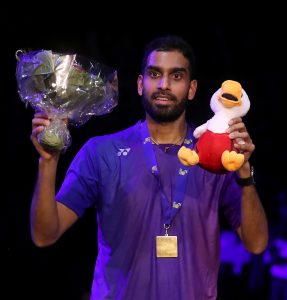 For Rajiv Ouseph, his Men’s Singles gold – won with a 21-19, 21-19 victory of Anders Antonsen – marks the start of a big week in which he will also get married to former GB Badminton star Kate Robertshaw.  He becomes only the third Englishman in the 49 year history of the Championships to be crowned European champion and the first for 27 years.

It was also second time lucky for England’s number one, having been runner up three years ago and today’s gold – his fourth from a career at the European Championships – completes a set that also includes silver and two bronze.

At 18-13 up in game one, Ouseph looked every inch a champion, sealing it 21-19, But he was forced to recover from 15-10 down in the second game before an uncontested six point run took him into a winning position.  And whilst Antonsen saved two game points, Ouseph kept his trademark coolness to convert Championship point at 21-19.

Whilst Ouseph won in straight games, the Adcocks went the full distance to three games in pursuit of gold, eventually winning their first ever European Championships medal together with a 21-17, 18-21, 21-19 victory in 1hr18 minutes.

Playing reigning champions Joachim Fischer Nielsen and Christinna Pedersen, the Adcocks were dominant in an opening game full of intent and passion but were pegged back by the world number five pair, taking the game to a decider.

And the final game of the 2017 Championships proved to be one packed with tension. The Adcocks established a four point margin at 15-11 then 18-14 before seeing the Danes close the gap to a one point deficit to 18-17.

But the Adcocks are made of world class resilience and restored the winning margin, finally claiming gold on their second Championship point.

“It means a lot to us to win gold. I’m so happy for us and for our coaches” said Chris Adcock, after emulating the gold medal success of Anthony Clark and Donna Kellogg in 2008.

It also comes in a week when Badminton England have launched new crowd funding opportunities to allow sports fans and the general public to invest in future success for English badminton and help fund the elite squad on the road to Tokyo 2020.