Japan will take their place on the HSBC World Rugby Women’s Sevens Series in 2017-18 after they beat South Africa in the final of the qualifying tournament in Hong Kong on Friday. 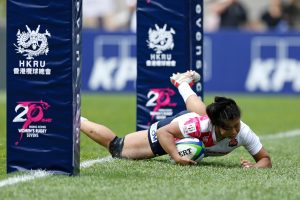 In the Hong Kong Stadium, the Sakura Sevens conceded two early tries but dug deep to remain unbeaten over the two days.

A try from Chisato Yokoo late in the first half gave Japan hope and further scores from Ano Kuwai, Honoka Tsutsumi and Mayu Shimazu sealed the win against a strong South African side for whom Zenay Jordaan had impressed throughout the tournament.

Speaking afterwards, Japan captain Chiharu Nakamura said her side were motivated by the disappointment of losing their core team status last season.

“We’re happy to win and we wanted to win. We want to play the top level teams on the series and now we will. We will enjoy tonight!

“I’m really proud of the girls and they worked really hard. Every game was very tough for us so thank you to everyone who supported us.” 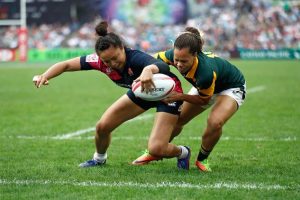 The last four teams moved from nearby So Kon Po to the Hong Kong Stadium for the semi-finals where South Africa faced Belgium – the surpise package of the qualifier – and Japan played Italy.

South Africa kicked things off when Jordaan scored with a wonderfully taken chip and chase try to open the scoring, before Belgium fought back with a try. But a needless yellow card just before the break was punished by South Africa’s Nadine Roos after the restart, when she used pace and skill to make it 12-7. That swung the balance in favour of the Springbok Women’s Sevens and another try ensured their passage to the final.

If defence is the first form of attack, Italy were always going to be on the back foot as Japan exerted their dominance in the second semi-final. In truth, Italy – with a squad packed with players from the recent Six Nations – could never really compete as two tries from Shimazu helped seal an emphatic 31-0 win. 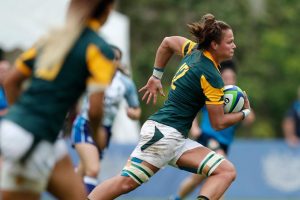 Earlier in the day, the action kicked off in the morning sun at So Kon Po where South Africa were made to work hard against a skilful Papua New Guinea team, but the Springbok Women’s Sevens were too strong, emerging 29-7 winners with Roos and Jordaan getting on the scoresheet.

The Netherlands were seen as a team with a good outside chance of winning this tournament, however their hopes evaporated in the Hong Kong sun when their neighbours Belgium shocked them 14-12 to progress to a semi-final against South Africa.

Italy and Kenya were up next and despite a strong start by the Lionesses, their discipline let them down and two yellow cards allowed Italy to progress to keep their hopes of core status alive with a 26-7 win.

Probably the two most dominant sides on day one, China and Japan took the field for the last quarter-final. China kept the game close in the first half, but the second half saw the Japanese emerge victorious, 28-14  – just as they had done when the sides met in the pool stages on Thursday.

The HSBC World Rugby Women’s Sevens Series 2016-17 continues in Kitakyushu on 22-23 April with hosts Japan joining the core teams. New Zealand currently lead the series ahead of Australia and Canada, with Spain and Brazil having work to do to ensure they retain their series place for next season.