Making it in any sport is because it’s in your blood, you’ve wanted to play it since you could walk, it is all you remember ever wanting to do. 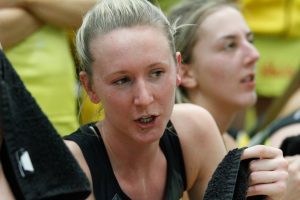 Well, not if you’re Emma Dovey, it’s not.

“I hated netball until I was 16,” she declares, unapologetically.

“My brothers were good at football and were really sporty and my mum and dad refused to have me as the only one that wasn’t so they forced me to play football.”

So, we should all be thankful to Emma’s parents for ‘forcing’ her to play sport aged 10, right?

The Manchester Thunder defender continues: “I was useless at football. So my mum had me playing that, hockey and netball and after six weeks, she said I had to pick one.”

Of course, that’s it, the former England youth player found her calling on the netball court like an epiphany? 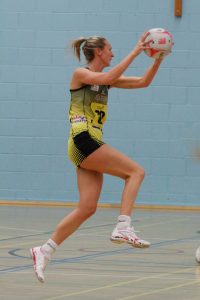 “I hated all three but I chose netball as one of my friends went, so I thought I’d keep going,” She adds, “I love it now, obviously.”

Emma’s story of netball discovery may not be romantic, but it is hers and it’s real. It reflects the qualities she needs when she plays in the Superleague now – tenacity, determination and maturity.

The 25-year-old’s parents may have given her the initial nudge, but it was a much-respected man that embodied the netball values she now carries – Mike Greenwood (former Oldham and Thunder head coach) – who gave her that first big shot.

“Mike Greenwood kept asking me to go to Oldham and I thought ‘I might actually be good at this’,” she says with a smile.

“It really didn’t click until I was 16 – I was a centre and then England moved me to defence, which I again hated at first.”

Part of the reason Emma held back from living and breathing netball was her desire to become a PE teacher.

“I always wanted to be a PE teacher and that was my main focus – netball was on the side,” she explains.

Emma currently teaches PE at Darwen Aldridge Community Academy and although it’s a daily challenge, the rewards keep her coming back for more.

And despite apparently being unable to spot her own raw talent, Emma has developed a real knack for seeing it in others.

She said: “The kids where I work don’t have the opportunity or the money to go to clubs, so school is all they have to play sport.

“You see kids coming in year seven and by the time they leave at year 11 they are completely different.

“I can spot raw talent but it depends on their attitude.

“You see them in the first few lessons and encourage them to come to the club and I see girls playing for Lancashire now and they say to me if I hadn’t encouraged them, they wouldn’t have made it.”

Emma is embracing her debut season as captain and is driven by the atmosphere on match days, especially in front of the home fans.

Being involved in the Thunder set-up for almost a decade has enabled the Leyland-born star to seamlessly fit into the huge shoes left behind when Sara Bayman left to play in New Zealand.

And having a defensive partner she knows so well in Kerry Almond, who she also plays with for Oldham, is vital.

She said: “I’d love to win the Superleague as captain, that would be cool.

“I’m not the most vocal captain. I just like to lead by example.

“I find it difficult to play with someone I haven’t played with. It helps as you know where they’re going to be. Kerry shouts at me all the time but I know that’s what she does.”

Getting plenty of court time and making the play-offs are Emma’s personal goals for the season.

And getting a telling-off from coach Karen Greig is an unusual motivator for her.

“Karen has been around as a coach at Thunder for five or six years and it helps that she knows us,” she revealed.

“I quite like getting a telling-off from her as it spurs me on. It drives me.”

While Emma admits there is no future for her with England, she would love to see the sport she has grown to love become professional.

“If I was 17 or 18 now and England came knocking it would be different. But I’m too old to leave my career for that.

“Netball needs to be professional and that will make a massive difference to the players.

Emma may have been inspired by her netball peers, but what she may be failing to notice – while her pupils, club and fans have not – is that she is the inspirational one now.