Manchester Thunder are set for what is expected to be one of their toughest away trips of the season, as they take on Wasps in round six of the Superleague. 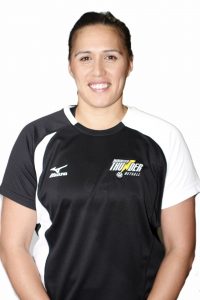 League newcomers Wasps have only been beaten once this season and are among the favourites to take the title. But Thunder are a team brimming with confidence and momentum – following three wins on the bounce – including their first away from home on Monday night.

The Black and Yellows will also welcome New Zealand playmaker Liana Leota back into the squad following injury.

Despite the quick turnaround between Monday’s victory over Team Northumbria and this evening’s game, Coach Karen Greig says her charge is ready for the challenge.

Greig admits Wasps, who have former Thunder player Natalie Haythornthwaite in their ranks, will be favourites for the match.

She said: “Hey, I love being an underdog! Having that tag is actually a good thing for us as we’re a team that will get out there and fight for each other and fight for the win.

“We had a lot of work to do in the week, looking as Wasps’ strengths and weaknesses, how we can combat that and get our fourth win in a row.”

Thunder take on Wasps at the Ricoh Arena tonight, with the first centre pass at 8pm.