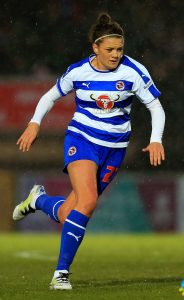 Nia, who can play in a variety of positions, has signed for Yeovil after her contract at WSL 1 side Reading FC Women ended in December. Jones joined Reading in 2015 from Cardiff City Ladies, where she previously worked under Jamie Sherwood. Nia was part of Reading’s first title winning season, so understands and has experience of the transition of going from a WSL 2 side to a WSL 1 side.

On signing she said: “I joined Yeovil because first and foremost I have a lot of respect for the club after what they achieved last season.”

“WSL 2 is a tough league where there are many teams who can sneak results against one another, so to get promoted as champions in the manner that they did was really impressive.”

The twenty-four- year-old is a well-established athlete, who has represented Wales in both football and netball. She has played for the Welsh women’s football team since the age of 16 and was involved in the 2016 Cyprus Cup, currently earning herself 30 senior caps.

Jones also plays for netball Super League side Celtic Dragons and competed at the 2014 Glasgow Commonwealth Games. However, she had to take a break from both sports after breaking her distal fibula in a training session towards the end of last season. Upon her return, Nia recently represented Wales in netball at a Test Series against second ranked in the world, New Zealand and is looking to prove herself in football at international level again.

Nia continued by saying: “Hopefully I can add some tenacity, drive and experience to an already solid squad.”

“The players and staff have been really welcoming and informative. It’s been quite an intense week as we’re preparing for the FA Cup fifth round so I already feel like I’ve built some good relationships on the pitch.”

On signing Jones, Jamie Sherwood said: “Nia is a player that I have worked with previously and I know her passion, determination to succeed.”

“She is an adaptive player who can give us flexibility across a couple of positions and that is really important to a club like ours.

“She knows what WSL 1 is all about from her time at Reading and I also know she has goals to reach. One of them is to establish herself as a WSL 1 Footballer and I am excited to see her growth here at YTLFC.” He said.