England Women secured their first Six Nations Grand Slam since 2012 with a 7-34 win over Ireland at Donnybrook Stadium on Friday night. 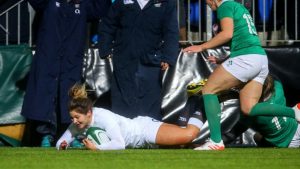 Ireland scored a try of their own through hooker Leah Lyons but it was not enough to prevent England’s first Six Nations win in Ireland since 2011.

The Red Roses took the lead in the 16th minute when Scarratt found Wilson Hardy with a fine looped pass and the Bristol wing dived over for her fifth try of the tournament.

England then survived a sustained spell of pressure from Ireland late on of the first half to go in at the break 0-5 ahead.

The Red Roses extended their lead 14 minutes after half-time when Worcester Valkyries prop Keates dived over to score a try on her 60th international appearance.

Ireland were reduced to 14 players two minutes before the hour when substitute Mairead Coyne made a deliberate knock on, and Scarratt knocked over the resulting penalty to pass 350 international points and move her side 13 points ahead.

Three minutes later Lichfield’s Cokayne received an offload from her Lichfield team-mate Scarratt and raced away to follow up her hat-trick in last weekend’s 64-0 win over Scotland with another try.

Ireland responded when hooker Lyons trundled over in the 64th minute and wing Tyrrell added the extras to take the score to 7-20.

The Red Roses sealed their bonus point four minutes later when Scarratt darted over after fine offloads from Bianca Blackburn and Wilson Hardy and wing Thompson came off the bench to add to the scoreline from a team effort.

The bonus-point victory sealed the Red Roses’ Grand Slam and they will return to Ireland in August for the 2017 Women’s Rugby World Cup.

England head coach Simon Middleton said: “The difference between winning and not winning this match would have been huge. To win the Six Nations was a major target for us and we’ve done it with a Grand Slam.

“It gives us a springboard and it keeps our winning mentality going. It also gives us confidence that what we’re doing is right. We know we can get better, fitter and stronger.

“That will be our next focus, but for now, I’m absolutely thrilled.”