Kay Wilson (pictured above) landed a record seven tries in England Women’s 64-0 win over Scotland in the fourth round of the Women’s Six Nations at the Twickenham Stoop on Saturday.

The Red Roses secured a total of 12 unanswered tries including a first-half hat-trick from Lichfield hooker Amy Cokayne. 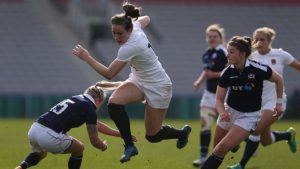 In a day of Women’s Six Nations firsts, Danielle Waterman also scored to land her 25th try on her 25th Six Nations appearance, while Wilson took her international career points total over a century, finishing the day with 115, as she shot to the head of the championship points scorers.

England now head to Dublin for a Six Nations grand slam finale, after Ireland secured a 7-12 victory against Wales earlier in the day at Cardiff Arms Park. With another bonus point win to their name, England top the Women’s Six Nations table one point ahead of their closest rivals going into the final week.

Head coach Simon Middleton said: “We’re thrilled with that performance. We had a clear picture about what we wanted to do, to play with intensity and tempo, and we delivered that for the most part. 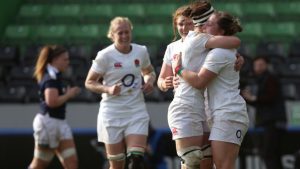 “It’s winner takes all against Ireland next week and that will be a totally different game which we’ve got to be prepared for. We’re under no illusions of how tough it’s going to be but if there’s ever a game you’d want to play as a rugby player it would be next week.”

Wilson began the scoring in the third minute from an Emily Scarratt pass and she had her second four minutes later when she was released by Harriet Millar-Mills.

Scotland No.8 Gemma Forsyth was sent to the sin bin in the 11th minute and soon after Cokayne was on the back of a driving maul to score her first of the afternoon before securing England’s bonus point after 20 minutes when she bundled over.

Waterman was then on the end of a flowing move three-minutes later to continue her fine record in the competition. 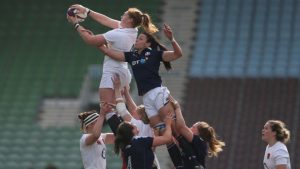 Wilson sealed her hat-trick in the 26th minute after receiving a long pass from Amber Reed and she showed her finishing instincts seven-minutes later. Cokayne scored her third try and her team’s eighth on the stroke of half-time after charging down a kick.

Wilson started the second period in the same vein as she raced away to cross for her fifth try five minutes after the break. On the hour mark the Richmond wing then became the first player to score six tries in a Women’s Six Nations match when she received another pass from Scarratt, her fourth assist to Wilson of the afternoon.

Scarratt crossed five minutes from time following an Alex Matthews offload and Wilson darted over again soon after to complete the scoring.

Of her seven-timer Wilson said: “It’s pretty amazing, I didn’t think I’d ever score three tries in a match let alone seven. It’s a credit to the team, I was out wide and the girls found me out there so I’m really proud of the team.”