Legendary England and Great Britain women’s hockey captain Kate Richardson-Walsh has been nominated for a place in the European Hockey Hall of Fame. 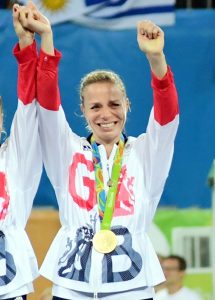 Kate won 375 caps in a 17-year international career, culminating in an historic Olympic gold medal for Great Britain’s women’s team in Rio last summer, lining up in the same team as her wife Helen. She then retired from international hockey at the very pinnacle of her career, having been named flagbearer for Team GB at the Olympic closing ceremony.

Having inspired a generation, since Rio she also became an OBE for services to hockey, and was the first hockey player ever to be nominated for BBC’s Sports Personality of the Year Award, finishing sixth overall and the second-highest placed female.

This week she was invited to 10 Downing Street to help mark International Women’s Day, and was also asked by the United Nations to be part of their HeForShe Arts Week.

375 caps for England and Great Britain

Awarded both the MBE and OBE for services to hockey

Fans can vote for Kate between now and 1st April here and the winner will be announced in this summer’s Rabo EuroHockey Championships in Amsterdam.