England Women will field another experienced side to take on Scotland in the fourth round of the Women’s Six Nations at the Twickenham Stoop on Saturday 11 March, KO 1pm.

The match-day 23 hold a total of 987 caps with head coach Simon Middleton making five changes to the starting 15 that secured England’s 29-15 win against Italy two weeks ago. 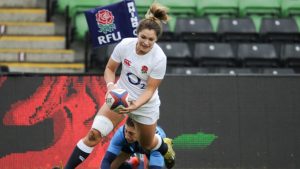 Bristol wing Amy Wilson Hardy, the leading try scorer of the championship so far, and Worcester Valkyries prop Laura Keates are rested for the game. Danielle Waterman and Lydia Thompson, who both missed the third-round match against Italy, return to the starting line-up.

Darlington Mowden Park Sharks fly-half Katy Mclean has been ruled out for the remainder of the competition following her three-week suspension after receiving a red card in the Italy game.

Aylesford Bulls prop Vickii Cornborough has been selected among the substitutes having not played in this year’s competition yet.

Head coach Simon Middleton said: “We hold a huge amount of respect for Scotland. They secured a brilliant win from 14-0 down against Wales last time, having taken Ireland to the final play of the game in the opening round.

“Against Italy, our set piece and first phase execution were outstanding but we didn’t back that up with good decision making in phase play. That lack of continuity has been recognised among the squad and we know exactly what we want to do to improve come Saturday.

“We are looking forward to what we expect will be a challenging contest and hope to have strong support from a good crowd for our last home game of the championship.”

Heading into the penultimate round of the 2017 Women’s Six Nations, the Red Roses sit top of the table ahead of Ireland on points difference, having secured wins against France (26-13), Wales (0-63) and Italy (29-15).

Coverage of the game is available on Sky Sports 3, delayed until Sunday at 8am. Tickets to attend are available online, priced at £5 for children and £10 for adults.

Report courtesy of the RFU via Women’s 6 Nations