England Women were beaten in the final of the Challenge Trophy, losing 10-0 to Spain at the Las Vegas Sevens.

The side struggled to overcome their tough opening day pool which featured the series’ leading two sides and tournament finalists, New Zealand and Australia, as well as Brazil. 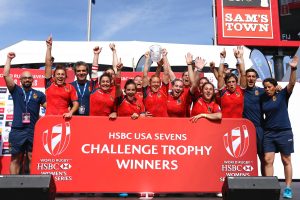 In Saturday’s final, Spain opened the scoring with Uri Barrutieta going over in the corner after good retention from England’s opponents.

Patricia Garcia then picked up off the back of a scrum to dart over from 5m to give Spain a 10-0 lead at the break. England could not find a way back into the game in the second half and Spain held on for victory.

Earlier, England had progressed to the final with a comprehensive 45-7 victory over Argentina. Kelly Smith opened the scoring after showing fine pace to score the first try. A minute later great hands released Chantelle Miell to race through and Alice Richardson-Watmore’s conversion took the score to 12-0.

Argentina showed great tenacity to create space for Deborah Fretes Hernandez to dart through and reduce the deficit. Holly Aitchison then collected Richardson-Watmore’s kick to score her first try on the World Rugby HSBC Women’s Sevens Series and the conversion gave England Women a 19-7 lead.

Millie Wood had her fourth try of the weekend after powering through midfield to score which Richardson-Watmore converted. Richardson-Watmore was the provider again with Miell the beneficiary of a fine floated pass which saw her cross for England’s fifth try.

Richardson-Watmore had a well-deserved try of her own then, racing nearly the length of the field to score under the posts – also converting her effort. Lauren Cattell added gloss to the performance converting her own try in stoppage time.

England failed to reach the Cup play-offs, beating only Brazil 12-0 in Pool C. The side opened their tournament with a 31-14 defeat by Olympic champions Australia before going down 27-5 to eventual tournament winners New Zealand.

England remain in eighth place in the overall series standings, six points behind France and four above Ireland,  with the fourth and next leg in Kitakyushu, Japan, 22-23 April.

You can see all the day’s results here.