The University of Bath won 37 medals – 11 of them gold – as student-athletes enjoyed a successful weekend at the BUCS Nationals in Sheffield, one of Britain’s biggest annual multi-sport competitions. 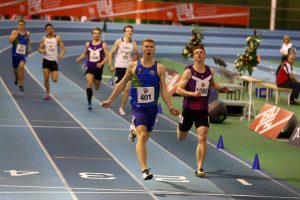 There were plenty of memorable moments on the athletics track, with Sport Performance student Cameron Chalmers – supported by a Thompson Education Trust Scholarship – equaling the championship record of 46.91 as he retained the men’s 400m title.

A sensational last leg saw the women’s 4x200m relay team of Bethany Close, Rachel Bell, Olivia Caesar and Rachel Donnison chase down Loughborough to take gold by two-hundredths of a second. Emma Nanson and Jade Simson had helped them qualify for the final.

That was Sport & Exercise Science student Caesar’s second title of the weekend, following her success in the women’s 400m, and Sport & Social Sciences student Pippa Rogan also topped the podium in the women’s high jump.

Josh Olawore won silver in the men’s long jump before teaming up with Chalmers, Josh Brown and George Marsh to take bronze in the 4x200m relay. Isobel Ives was also third in the 800m.

MJ Church sporting ambassador Jay Lelliott – who, like Siebrecht, is a Santander Sport Scholar – won silver medals in the 200m freestyle, 400m freestyle and 200m butterfly. He also claimed two relay bronze medals – with Miles Munro, Charlie Pullan and Andrew Roy in the 4x100m freestyle and with Joe Burrin, Will Harrison and Thomas Sinclair in the 4x100m medley.

Caspian Watt was a sabre bronze-medallist in the fencing salle, while Bath students also competed well in the climbing and trampoline events.

The next big event in the BUCS (British Universities & Colleges Sport) calendar is BUCS Big Wednesday, the culmination of the regular league season, which is taking place at the University of Bath Sports Training Village on Wednesday, March 22 and will feature thousands of athletes from across the country.