Southern Vipers will get their Kia Super League title defence underway live on Sky Sports and BBC Radio this summer when they take on Western Storm at the Ageas Bowl on Thursday 10th August in the opening clash of the 2017 twenty20 (T20) competition.

The re-match of last summer’s inaugural Kia Super League final will precede Hampshire’s NatWest T20 Blast encounter against Glamorgan, and is one of six domestic “double-headers” between the two tournaments, which will all be televised live on Sky Sports, with ball-by-ball commentary also available on BBC Radio.

After the huge success of the first Kia Super League last summer, which saw over 15,000 fans enjoy watching the 15 group stage matches, the second season will follow the same format, with the six teams taking part in a round-robin competition over a 17 day period and across 13 different venues from Thursday 10th August to Saturday 26th August 2017.  The competition will once again climax in a showcase finals day involving the top three teams on Friday 1st September at the 1st Central County Ground in Hove.

In addition to the six double-header group stage matches, Sky Sports will provide live television coverage of finals day, with BBC Radio covering every round of matches, alongside finals day.

Please see attached the full outline of the Kia Super League 2017 fixture list, including broadcast details.  Match start times and ticket information will be confirmed in due course.

ECB Director of England Women’s Cricket, Clare Connor, commented: “At the end of last summer I said that I was immensely proud of what the Kia Super League had achieved during its first season, but equally I stressed that there was still considerable growth potential for the competition.

“Moving into year two I am therefore delighted to announce the next historic moment in the development of the domestic women’s game in this country, with six Kia Super League group stage matches plus finals day due to be televised live on Sky Sports, alongside enhanced levels of broadcast coverage throughout the competition on BBC Radio.

“In total, we will be taking the Kia Super League to 14 different venues during the season, which presents a fantastic platform to spread the game to new audiences across the country.  Alongside the ICC Women’s World Cup in June and July, we have a brilliant opportunity to showcase the sport this summer, grow our participation base and inspire more fans than ever before to watch and get involved with women’s cricket.”

Bryan Henderson, Sky Sports Cricket Head of Cricket, said: “Sky Sports is giving women’s cricket a platform like never before.  With excellent attendance figures for the inaugural Kia Super League last year, we can’t wait to broadcast the competition live into homes for the first time this summer.  This is another example of Sky’s fantastic support of the women’s game, we hope our coverage this summer will help inspire the next generation of cricketers.”

BBC Test Match Special Producer, Adam Mountford, added: “After providing extensive commentary on the first year of the Kia Super League, we are thrilled to be able to extend our coverage this summer with every round of matches broadcast on the BBC.  You will be able to keep up to date with the twists and turns of the whole tournament via BBC Radio, online and the BBC Sport App, plus regular podcasts rounding up all the latest action.  This continues our commitment to covering the women’s game which has recently included commentary on all of England’s home fixtures plus coverage overseas during the tour to the West Indies last October, and the ICC Women’s World T20 in India in March.”

All six competing Kia Super League teams have been awarded hosting rights for a four-year period from 2016-2019 inclusive.

The key aims of the Kia Super League include the development of ever higher standards for the England women’s team with greater competition for places, alongside inspiring more women and girls to play cricket at all levels.  It offers new opportunities, new role models, and a network of six new women’s teams linked to their communities. 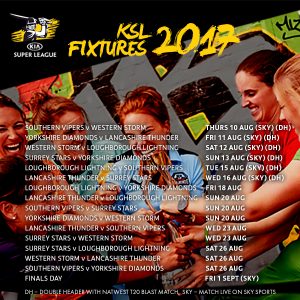