Becky Jane, 24, has extended her contract at the Reading FC Women for a further 18-months, the defender’s contract had been due to expire in December. The extension equals the longest contract ever agreed by the club after Lauren Bruton’s extension last week. 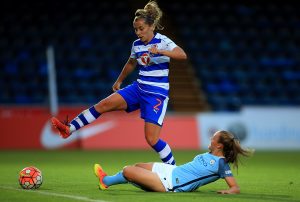 Jane, who was named Reading Women’s fans player of the year last season, can now look forward to the Spring Series and two full ‘winter seasons’ with the Royals.

On signing the new deal Becky Jane said “I’m delighted to have signed with the club until 2019, I have been here for 5 and a half years and I’m so proud of how far the club has come in such a short space of time”.

Manager Kelly Chambers: “I’m delighted that Becks has extended her contract with us. As we saw last season she is a key player for us and always performs consistently well. Becks has only been a full back for 3 years but has stepped into the role very well. There is still so much more to come of Becks as she develops even further and I am looking forward to supporting her development and pushing her to fulfil her potential.”