World No.8 Shuker defeated Dutch world No.4 Marjolein Buis 6-2, 6-3 in her women’s singles quarter-final, coming from 2-0 down in the second set to win six of the last seven games.

After reaching her second Australian Open singles semi-final since 2013, Shuker will now play second seed Yui Kamiji of Japan on Thursday for a place in the final.

“I’m very happy with how I played today. I felt I executed my game plan really well and it’s great to get a win over the world No.4 in the first Grand Slam of the year. I’m looking forward to my semi against Kamiji and then playing the doubles, too,” said Shuker.

Later on Thursday Shuker and Buis will pair up to play Dutch top seeds Jiske Griffioen and Aniek van Koot in a bid to also reach their second Australian Open women’s doubles final together after being finalists in 2013. 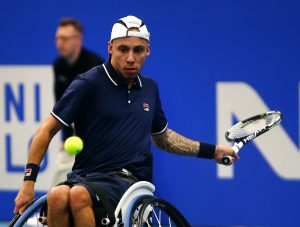 Lapthorne consolidated an early break in the first set of his first quad singles round-robin match to set up his second victory over American world No.2 David Wagner this season, wrapping up a 6-3, 6-3 win. World No.3 Lapthorne now faces Australian world No. 1 Dylan Alcott in his second match on Thursday before taking on Alcott’s countryman Heath Davidson on Friday.

The top two players after the completion of the quad singles round-robin matches will meet again in Saturday’s final.

“I’m really pleased to get off to a winning start,” said former US Open champion Lapthorne. “I knew coming in here I was playing some good stuff, so to execute under pressure was pleasing. I’m looking forward to building on the win and trying to make the final.”

Lapthorne and Wagner team up in their quest for a third Australian Open quad doubles title together on Thursday, when they face Alcott and Davidson.

Top seed Reid came from 3-0 down to take the second set and built a 5-3 lead in the final set but was unable to sustain his challenge as Gerard advanced 7-5, 5-7, 7-5. Reid and Gerard will be on the same side of the net on Thursday when they face Dutchman Maikel Scheffers and Ben Weekes of Australia in the men’s doubles semi-finals.

Hewett’s Australian Open debut saw the 19-year-old world No.6 take a set off world No.2 Stephane Houdet for the third time, but Houdet ultimately had the edge in the decider as Gerard progressed to the last four 6-3, 3-6, 6-3.