Sunday the 22nd of January saw Hunslet make the long journey over to Hull Wyke to play the Quarter Final of the Plate competition. 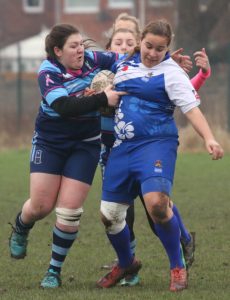 Conditions were dry but heavy underfoot and we all knew that today was going to be a tough battle. This was the 3rd time both teams had met this season, having already played each other in the league and the cup. Hunslet taking the spoils in both previous encounters but Hull wanted their scalp today.

Hull opted to kick and Hunslet received and mounted their first attack, only managing to get to the 3rd tackle before knocking on at the half way line. Hull organised straight away and could soon see the Hunslet line only to hand it back 10m short on the 6th tackle.

The game continued like this for the next 10 minutes with both teams making ground in the opposition’s half only to relinquish possession and have to do all the hard work again.

Things changed for Hunslet around the 15 minute mark. With good driving runs from Annie May Shackleton, Jo Harrison and Hayley Portrey they found themselves on the Hull 20m line. With 2 tackles still in the bag, the half backs linked up well and Anita Sharrocks ran down the short side to force her way over for the first score. 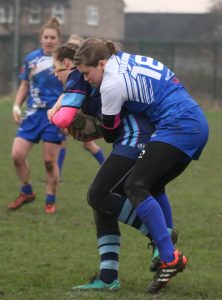 Hull now upped their game, and tested Hunslet again and again; making good yards only for them to lose the ball due to a loose carry.  Once more Hunslet capitalised, using the pack, first Charlotte Cawthra then Nikita Hunter before Erica Zanre crossed for the 2nd try of the game.

The forwards were now taking a real battering in the middle, and both teams lost players to injury, with Hunslet’s Annie May Shackleton suffering a broken leg.

This proved a heavy blow for Hunslet, and Hull came barging through the Hunslet line to score.

The game restarted and it was clear that Hunslet felt they still had something to prove. They were now passing the ball around, the confidence growing in the team. They attacked the right channel and were just too much for the Hull defence, Olivia Gosling crossing in the corner for her first Hunslet try. 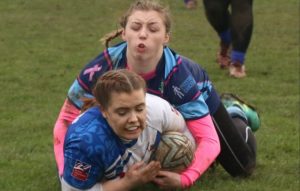 Hunslet were 8 points in front but you could sense Hull had tries in them and they weren’t throwing in the towel. The Hull forwards were formidable and relentless in their attack. With Ruby Magson hitting it up time and again. It was only down to a fantastic defensive blue wall that they didn’t score. Totally against the run of play Hunslet’s Cheryl Armitage came through the Hull line, with chasers hard on her heels she just made the try line.

Far from been done Hull still kept going, and were rewarded late on the 2nd half with another try.

Only minutes left in the game now but neither team was giving up. With the props going head to head, the half back and centres too it looked like it would boil over, but all managed to keep their composure. Hull struggled to mount an attack coming out of their 20m and the Hunslet pressure paid off. Hull knocked on, Hunslet took full advantage, a quick tap and fast hands saw Cheryl Armitage cross for her second try

After the match Hunslet Warriors coach Jon Harrison said: “At no point did I feel comfortable with the score line and Hull could have scored at any time. A massive thanks to Hull Wyke, the ladies and their hospitality. The coaches are doing a sterling job with the girls and I’m sure next year they’ll be a true force to be reckoned with.”