It had been nearly a year since the two teams had last faced each other, with a draw and a narrow Hunslet victory last season, this was going to be a  good bench mark to see how both teams had developed in that time.

Hunslet had trained really hard that week and were brimming with confidence, and with a late influx of new signings took to the field with a full squad of 17. 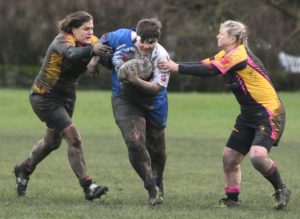 Odsal won the toss and opted to play up-hill, great tactic in my opinion.

Hunslet playing downhill didn’t have it all their own way in the first 10 minutes. Odsal kept the pressure up and kept forcing errors. With the pace of the game so fast it was only a matter of time before the score line changed.

That came around the 11 minute mark when Hunslet took full advantage of a half-way penalty; playing down the middle with first Nikita hunter then Jo Harrison before a perfectly weighted kick from Gail Johnson saw Aimee McVitee score in the corner. Conversion missed. Odsal 0 Hunslet 4

Hunslet had now found their feet, and kept up the attack, not forcing it and happy to turn over ball in the Odsal 20 metre.

Hunslet also made some tactical substitutions, bringing Hayley Portrey onto the field and this proved pivotal. 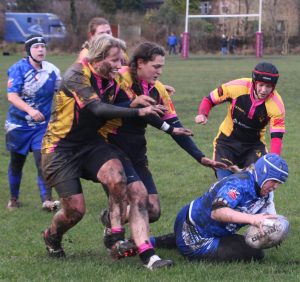 Another structured attack and Hunslet were over again. This time with Annie May Shackleton. Gail Johnson put the conversion just wide. Odsal 0 Hunslet 8.

Odsal weren’t done though, and kept pushing up that hill, only to be thwarted time and again at the last hurdle by the Hunslet scrambling defence.

Hunslet brought the ball away after another failed Odsal attack, picking up a penalty near the half way line. They came again, quick thinking from Gail Johnson, good feet from Anita Sharrock saw her go over for a well deserved try.

With the game nearing half time the game looked all but done. All players seemed to be ready for the whistle. Then all of sudden a little break from Chloe Brown things took a turn, Hunslet smelt blood and they weren’t going to settle for a 14 point lead. Fast hands saw the ball come to Megan Davies who crossed in the far right corner. Conversion missed

Hunslet knew the hard work now had to be done, playing up hill after giving so much wasn’t going to be easy.

Odsal wasted no time and came attacking straight away. With a strong pack they battered Hunslet and soon found themselves camped in the Hunslet 20 metre.

Time and again Odsal tried to score, and Hunslet withstood the onslaught. Hunslet were struggling to make ground against such a battle hardened team hell bent on scoring. Hunslet opting to kick early several times just to relieve the constant pressure.

No team was going to hold out forever and eventually Odsal came charging through, a well deserved try for Rose Nash. Conversion missed Odsal 4 Hunslet 18

Now it was time to stand up be counted for both teams. Odsal had tries in them but Hunslet had a hunger, and they weren’t conceding any more.

Going up hill Hunslet first worked right, then swung it left. Cheryl Armitage made a break only to be brought down on the Odsal 30 metre line. Driving for the sticks, the Odsal defence sucked in enough to get the ball away left. Cheryl Armitage came onto a short ball and forced her way over to score. Conversion missed Odsal 4 Hunslet 22

With seconds left Hunslet decided to chance their arm for yet more points.

Pushing the attack out to the wing through many hands the ball found itself in the grasp of debutant Nicola Walker. She had the line in sight, but the Odsal defence had read the play and slid across to deny Nicola her first try in her first ever game. Hard luck but they’ll be plenty more chances for her I’m sure.

I’ll just add it wasn’t all one way traffic and Odsal gave a really good account of themselves. They should all be proud of their effort today. Hunslet are becoming a real force to be reckoned with this season.