Loughborough Lightning Badminton team narrowly lost out 3-2 to local rivals University of Nottingham in the latest round of the National Badminton League, but still remain on course for a place in the Championship Final. 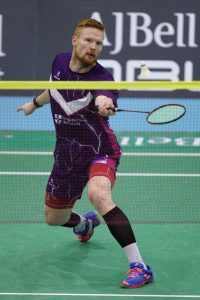 After a stunning 4-1 win away at defending champions Birmingham Lions last time out, Lightning were forced to make a number of changes to their starting line-up, due to injuries to Jenny Moore and Vicki Williams.

In the opening event, the mixed doubles, 15 year old Hope Warner came in to partner Greg Mairs and did a terrific job opening serve. The youngster demonstrated that she’ll be a star of the future, but alongside Loughborough University student Mairs she couldn’t quite stop Nottingham duo Jess Pugh and Adam Hall taking the win in the final set.

It was one-way traffic in the women’s singles, as Chloe Birch lost only the second singles game of her NBL career, as Malaysia’s Li Lian Yang took a 3-0 win. It was a tough ask for Birch, taking on world class opposition after an exam that morning and with two further exams looming the following day.

A new look, beardless Henri Hurskainen pulled a point back for Lightning with a comfortable 3-1 win over Gordon Thomson, the Swede looking in control throughout despite losing the first set.

Back on court for the second time, Birch was joined by friend and fellow Loughborough student Jordan Hart in a match that had everyone on the edges of their seats. The home crowd thought they had the match night sown up; however one point from defeat the duo in purple dug their heels in.

Still some way from a victory, Birch and Hart combined wonderfully to mount a thrilling comeback and send it to a fifth and final set, which they won on the final point 5-4.

That sent the match night into a decider, which featured alumni Harley Towler and Peter Briggs in the men’s doubles. Losing the first two sets the pressure was on, but they fought back to win the third 9-7. The fourth set was agonisingly close, but unfortunately they succumbed to Nottingham’s attack, losing out 9-7, meaning the hosts took the match night victory 3-2.

Lightning now sit second in the seven team league table, one point behind Birmingham, who have played a game more than every other side.

Tickets for Lightning’s penultimate home match of the season against Bristol Jets on Monday 23rd January can be purchased here.