Team Bath Netball will be cheered on by a sell-out crowd when they kick off 2017 by hosting a tri-tournament against fellow Vitality Netball Superleague franchises Loughborough Lightning and Wasps on Saturday. 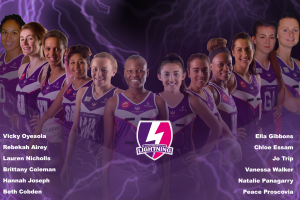 All tickets have been snapped up for the pre-season event, which will see three matches played during one action-packed afternoon at the University of Bath Sports Training Village (12.30-7pm).

It will be the first opportunity for fans in the South West to see the new-look Blue and Gold squad – sponsored by Sitec – in action ahead of the 2017 Superleague season, which gets under way in February.

Among the home favourites they will be cheering on are new Jamaican international signings Vangelee Williams and Shantal Slater plus Rachel Shaw, who has been named in the England squad for this month’s Netball Quad series against Australia, New Zealand and South Africa.

University of Bath Sport Performance student Paige Reed, supported by a Santander Sports Scholarship, will also feature before joining up with the England U21 squad for their January fixtures.

Jess Thirlby, Director of Netball at Team Bath, said: “It’s great to see our amazing fans turning out in force once again and we hope to give them plenty to cheer on Saturday.

“Our pre-season preparations have been going well and we are looking forward to testing ourselves against two of the most talented squads in the Superleague.”

Coventry-based Wasps are a new franchise for 2017 but there are a couple of familiar faces in their squad for Saturday in former Team Bath players Rachel Dunn and Tamsin Greenway, who is also Director of Netball for Wasps.

Completing the line-up for this weekend’s tri-tournament is a Lightning outfit who will also provide the opposition for Team Bath’s first home fixture of the 2017 Superleague season on March 6 – a match which is part of the University’s 50th-anniversary celebrations.

That is one of a bumper nine home matches being played at the Sports Training Village this year and season tickets are on sale now priced £75 for adults and £50 concessions.

Tickets for individual matches are also available priced £12 for adults, £8 concessions and £35 for a family ticket admitting two adults and two children or one adult and three children.

Team Bath Netball are sponsored by Sitec, Mogers Drewett are their Education Partners, Surridge are the kit supplier and Skins provide the team with compression wear.